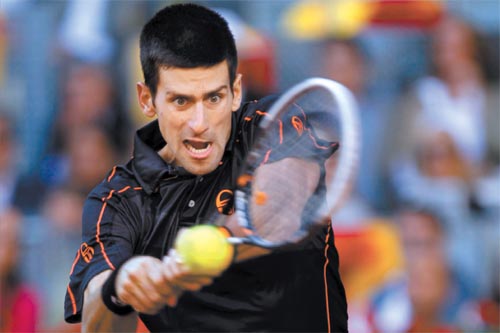 Novak Djokovic of Serbia returns the ball to Rafael Nadal of Spain during their Madrid Open final tennis match in Madrid on Sunday. [REUTERS/YONHAP]


MADRID - Novak Djokovic produced perhaps the most impressive of his 32 straight victories this year, beating top-ranked Rafael Nadal in straight sets on clay in the Madrid Open final to extend his unbeaten start to the season.

The second-ranked Djokovic wasted a 4-0 lead in the first set but recovered to win 7-5, 6-4 and end Nadal’s latest winning streak on clay at 37 matches. The Serb also beat Nadal in the final in Miami and Indian Wells this year, but this was his first victory in 10 tries over the Spaniard on his favored surface. It was Djokovic’s sixth title of 2011 and allowed him to surpass Bjorn Borg’s 31-match unbeaten run from 1980. He now only trails the 42-0 start by John McEnroe in 1984.

“Probably it’s right at the top,’’ Djokovic said about beating Nadal on clay on Spanish soil. “Under the circumstances I was playing an unbelievable match. .?.?. I stepped onto the court today believing I could win. I needed to be aggressive and it was a great match.’’

Djokovic’s 34 straight wins since Serbia’s Davis Cup triumph in December is the eighth best of all time.

“I came up against a great player obviously - he’s having a monster year,’’ Nadal, the defending champion, said. “He was better, you have to accept that.’’

Nadal’s last defeat on clay came nearly two years ago against Robin Soderling at the French Open. He had won six titles on clay since, and this was only his seventh loss on the surface in 196 matches dating to 2005.

Nadal had split the last two finals here with Roger Federer, and beat the Swiss star in three sets in the semifinals on Saturday. But Djokovic once again proved too tough and avenged his loss from 2009 at the Magic Box arena, when the pair squared off in a record four-hour plus semifinal.

Djokovic spent most of the last few seasons as the No. 3 player in the world behind Nadal and Federer, but started the year by winning the Australian Open and hasn’t looked back since. On Sunday, he was faced with what is widely considered the toughest test in tennis - Nadal on clay - and his victory is yet another signal that a permanent power shift may be in the works.

“I’m happy I can play the best tennis when I needed to and maybe that was lacking a lot in the past,’’ Djokovic said. “Maybe that’s what was missing against Rafa and Roger in the past tournaments.’’

“The game started terribly,’’ said Nadal, who also won here in 2005. “I have to play more aggressive with the forehand.’’

While Nadal still holds a healthy advantage over Djokovic in the world rankings, the Spaniard said it’s only a matter of time before Djokovic takes over the No. 1 spot if he keeps playing like this.

“The No. 1 ranking is not in danger - it’s finished. Let’s not lie to ourselves, that’s the reality,’’ Nadal said. “Nobody likes to lose. I have to see what’s missing and working with a cool, open mind to decipher things and find the solutions. To try to do a little better next time.’’