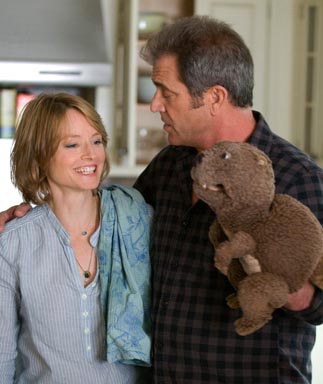 In this publicity image from Summit Entertainment, Jodie Foster and Mel Gibson are shown during filming. [AP/YONHAP]

LOS ANGELES - Mel Gibson’s long-delayed first movie since he was embroiled in a messy domestic dispute with his ex-girlfriend flopped at the weekend box office in North America.

“The Beaver,” an offbeat comedy-drama directed by and co-starring his close friend, Jodie Foster, earned just $104,000 during its first three days of limited release in 22 theaters, its distributor said yesterday.

Its per-theatre average of $4,745 ranks at No. 62 among the 139 limited-release movies tracked this year by Box Office Mojo. Among recent prestige debuts in a similar number of theatres, “Black Swan” opened to an $80,000 per-theatre average last December and “The Girl with the Dragon Tattoo” to $9,900 in March 2010.

The $21 million film will expand across North America on May 20, coinciding with a screening at the Cannes Film Festival, said distributor Summit Entertainment.

Gibson, 55, stars as a suicidal businessman who finds salvation in a furry hand puppet he has salvaged from the trash. Critics were enthusiastic about his performance, pointing to eerie parallels between his character’s alcoholic haze and the actor’s own real-life problems.

“If you can get past your feelings for the troubled Gibson, you get to watch a high-wire performance of the highest caliber,” said Rolling Stone critic Peter Travers.

Filming was completed more than a year ago but the release was put on hold after audio tapes were leaked last summer of an angry Gibson threatening the mother of his baby daughter as their brief relationship hit the rocks. It eventually premiered in March at the South By Southwest Film Festival in Texas.

The “Braveheart” and “Passion of the Christ” director has struggled to recapture his box office magic in recent years as his personal life has taken center stage. He made anti-Semitic slurs in 2006 while being arrested for drunk driving, duly apologized and went into rehab.

His wife of almost 30 years filed for divorce in 2009 and Gibson fathered a daughter later that year with his girlfriend, a Russian pianist. That relationship blew up in spectacular fashion last year with a vicious custody battle, highlighted by the leaked telephone voice mails.

This further damaged his reputation, as his Hollywood agents dumped him and he was dropped from a cameo role in the upcoming “Hangover” sequel. He was last in theatres with the thriller “Edge of Darkness,” which opened to an encouraging $17 million in January 2010 but quickly faded to a $43 million finish.