[INTERVIEW] Broadcasters may struggle to survive

[INTERVIEW] Broadcasters may struggle to survive 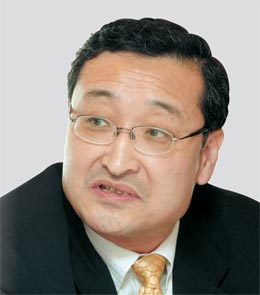 Visual content, which has been mainly provided through television until now, is slowly making a transition onto the Internet as technology becomes more advanced in terms of speed and picture quality around the world. High-definition video content is becoming available to be either streamed in real time or downloaded in just minutes.

While such portable devices have great visual displays, more content providers are concentrating on individual users instead of attracting all of the family. Gone are the days that families watched movies together on cable or satellite. Instead, each family member now prefers to watch their programming by choosing movies or television programs online and then renting or downloading them.

Bang Suk-ho, the president of the Korea Information Society Development Institute, traveled to the United States last month to survey the contents distribution market and its structure.

He visited the National Association of Broadcasters convention in Las Vegas, the largest event of its kind in the world. He also met with several major content providers that may soon become competitive in the Korean market.

Bang told the JoongAng Ilbo that the convergence of broadcasting and communications is a challenge for all content providers as global players are coming up with new business models and plan to gain a dominant market share in the worldwide market.

Bang also added that fact that Korean content providers are still far behind and slow in making significant advancements in this area.


Q. What threats do you see from glo bal contents providers?

A. I personally feel that it won’t be much longer until Google TV, which is a combination of television and Internet content, and Netflix, who converted its distribution network from the home delivery of rental DVDs to an online video content service, enters the Korean market. With the aggressive moves of foreign companies that threaten to dominate the local market, I feel it is still not too late to create an innovative content distribution platform that would be exclusively tailored for Korea. Also, general programming channels, including jTBC, should be the right ones to do that job in the Korean market.

What are your thoughts on the NAB convention after visiting it in Las Vegas?

The interest in mobile TV was amazing. Companies including NBC and Fox came up with their own devices and showcased them at the show. Content providers that are jumping into the video distribution market to target consumers is big news. The time when the entire family gathered around in the living room to watch TV together is gone and a new era has begun where each family member enjoys their own individualized screen, either through wire connections or wireless Internet networks.

Isn’t the reason why Netflix is doing so well is because they have formed a strong online distribution network?

After visiting the NAB Show, I went to San Francisco to visit the headquarters of Netflix. From 2007, the company allowed its DVD rental subscribers to view movies and television programs online without extra charge and it is also planning to stop its offline rental service by 2013. They were considering making an entry overseas and they seemed to have finished the market research on Korea already.

If Netflix is a comprehensive distribution system that combines content makers with consumers, Google TV is somewhat of an open platform which allows any contents on the Internet to be viewed on TV.

I have heard many impressive things from the executives in charge of Google TV. Its chief executive Larry Page emphasized that as much content as possible will be made available on its TV service.

I believe Google is so sure of its strategy that, if they can secure a large amount of content to provide to consumers, users will join the service without much effort on the part of the company.

Why do you think that the dominant power of the terrestrial broadcast channels has become an obstacle to the growth of the online content distribution market?