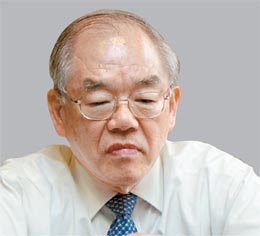 The Korea Advanced Institute of Science and Technology made headlines this year after the suicides of four of its students and one professor.

People in educational circles and the media said the students’ suicides may have been caused by an increase in competition and stress at Korea’s premier engineering school, especially from policies introduced by President Suh Nam-pyo, who took office in 2006. Suh instituted an English-only policy for lectures and also reduced scholarships for students whose grades dropped.

Suh, 75, talked to JoongAng Ilbo on April 28 and May 3, and shared his experiences as a student when he moved to the United States, where his father was teaching at Harvard University. Suh studied abroad from 1954, when he was sophomore in high school, and graduated from Massachusetts Institute of Technology. He was a professor at MIT from 1970 to 2001


Q. You would have experienced some stress at school since you studied abroad from an early age.

A. I went to Browne and Nichols (whose name changed to Buckingham Browne and Nichols in 1974), which is located near Harvard. I later found out that a former United States ambassador to Korea, Alexander Vershbow, went to high school with me.

The school did not provide any special treatment for a student who had just arrived on American soil and barely spoke any English. I was treated just like other students, and of course I went through some hard times there.

How did the teachers teach?

There was one teacher, an English Ph.D from Yale University. He selected a piece by William Shakespeare and had his students study it after school and then had a test on it. He gave me 0 points on the essay I submitted on the piece. The shock I got was indescribable and I thought it was too cruel. But now I thank him for being so harsh on me. After I spent some hard times at high school, history classes or classes on western civilization at college were much easier for me.

Did you never feel devastated by shocks at school?

Sometimes I thought it was the end of the world but after some time passed, I naturally realized that it was nothing serious.

When you were frustrated, did you ever think about committing suicide?

Suicide? I’ve never had any chance or a moment to even think about it.

Some people say you work in a self-righteous way. Do you agree?

Well, if people say that, how can I respond? I can’t say I don’t have that characteristic at all. I personally think that I’m open to ideas from other professors. Yesterday (May 2) I had a discussion with math professors for about two hours.

KAIST reaches very talented students. Can a school take more consideration of student’s emotions as well as their learning?

There are some students who feel isolated and helpless after taking some classes at school. They are usually from the non-specialized schools such as foreign language high school or science high schools. Yesterday, Jang Young-shin, a president of Aekyung Group, donated 3 billion won ($2.75 million) and I’m going to build a consultation center for students. I think the psychology department at the school hospital is lacking in accessibility. So I’m going to build a new center to support students who have problems and make it possible for them to get the help they need. Also, I’m going to encourage students to do more group activities.

Some have said that most of the board members, who have to decide on curriculum reforms following the suicides, are your loyalists.

I don’t agree. Among the board members, there is one member who did not want me as president of KAIST. There are a few who didn’t want me serve another term. However, the other board members are the ones who really want to push this reform.

You have implemented a strict evaluation process for your tenure at KAIST and that process is spreading to other universities in the nation.

At first, I led that movement, but now the committee that decides on tenure takes it forward. I think they’ve put an even higher emphasis on evaluations in the decision to grant tenure. I think that process has been settled here.

Regardless of the recent suicides, some say college students in general have weaker spirits these days.

I think parents take part in their children’s lives for too long. In the United States, when a child turns 18, he or she is acknowledged as an independent human being. Parents cannot check their child’s school record unless the student agrees. One time, a mother of a KAIST graduate student sent me an e-mail saying her kid tells her the dorm is too cold. If the dorm is cold, why didn’t the student just talk to someone? I think it’s important to be independent and not to lean on others. There is one thing I have a hard time understanding: when children get married, the parents buy them a house. If the kid is really broke, why doesn’t he borrow the money from his parents?

Do you usually speak so directly?

People sometimes say that I’m straightforward. I guess I’m not very good at talking around a subject. Recently I sent out an e-mail to professors that they should be more careful about any kind of sexual harassment. I guess I could have used some euphemism, or said something like, “99.99 percent of the professors will not be involved in this issue but just be careful.” Instead, I said that I had no tolerance of sexual molestation or sexual harassment. The way I said it offended a lot of professors.