After leader crashes, a Brit wins his 2nd Indy 500

After leader crashes, a Brit wins his 2nd Indy 500 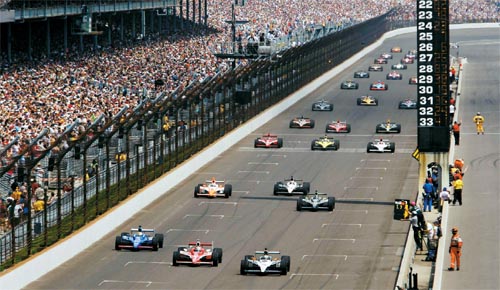 The field drives in a pace lap before the start of the 100th anniversary of the Indianapolis 500 on Sunday. [REUTERS/YONHAP]

Leading by almost four seconds with a lap to go, the 23-year-old Hildebrand skidded high into the wall within sight of the checkered flag.

Wheldon, the 2005 winner but without a full-time ride this season, appeared headed for his third straight second-place finish when Hildebrand took the white flag needing only to make it through the last of 200 laps.

The first three turns went smoothly. Then Hildebrand came up on another rookie, Charlie Kimball, in the fourth turn. Instead of backing off, Hildebrand moved to the outside to make the pass and lost control, slamming into the wall to a collective gasp from the crowd of 250,000.

“I caught him in the wrong piece of track,’’ Hildebrand said. “I got up in the marbles and that was it.’’

Hildebrand’s crumpled machine slid across the finish line, still hugging the wall, in second place. While Wheldon celebrated, IndyCar officials reviewed the video to see if Wheldon passed the wrecked machine before the caution lights went on. It appeared he did, giving the Brit another Indy 500 title with a part-time team.

“I just felt a lot of relief. It’s an incredible feeling. I never gave up,’’ Wheldon said. “It’s obviously unfortunate [for Hildebrand], but that’s Indianapolis. That’s why it’s the greatest spectacle in racing. You never now what’s going to happen.’’

He took the traditional swig of milk and headed off on a triumphant lap around the speedway - a lap that Hildebrand should have been taking.

Instead, the youngster stopped by the garage to get a look at his mangled car, which was hauled through Gasoline Alley instead of being wheeled into Victory Lane. He’s now in the company of athletes such as golfer Jean Van de Velde, who squandered a three-shot lead on the 72nd hole of the 1999 British Open, and Lindsey Jacobellis, whose wipeout at the 2006 Winter Olympics cost her a gold medal.

They had it in the bag - then threw it all away.

“I’m just frustrated. It’s not because we came in here with the expectation of winning and we didn’t,’’ Hildebrand said. “I felt like I just made a mistake and it cost our boys. I guess that’s why rookies don’t win the Indianapolis 500 a whole lot and we’ll be back next year, I guess.’’

The 100th anniversary of the race was dominated much of the day by Chip Ganassi’s top two drivers, defending champ Dario Franchitti and 2008 winner Scott Dixon.

But after a series of late pit stops, things really got interesting. Second-generation racer Graham Rahal spent some time up front. Danica Patrick claimed the lead, but had to stop for fuel with nine laps to go. Belgian driver Bertrand Baguette had already gotten past Patrick, but he didn’t have enough fuel, either.

When Baguette went to the pits with three laps to go, the lead belonged to Hildebrand. All he had to do was make it to the end.

He came up one turn short.

“My disappointment is for the team,’’ Hildebrand said. “We should’ve won the race.’’

Not that Wheldon isn’t a deserving champ. Despite plenty of success in his IndyCar career, he lost his ride at Panther Racing - where he was replaced by Hildebrand, no less - and couldn’t find a regular job this season.

He sat out the first four races of the year, then picked up a one-race deal with Bryan Herta Autosport.

Surely, Wheldon will be able to find a better gig now after beating Hildebrand.

Still, it was a bitter disappointment for Patrick, who ended up 10th.

It was the second time a driver lost the lead on the last lap - it happened to another rookie, Marco Andretti, in 2006 - and it’s something Hildebrand will always remember.