Williams sisters back in action after lengthy injuries

Williams sisters back in action after lengthy injuries 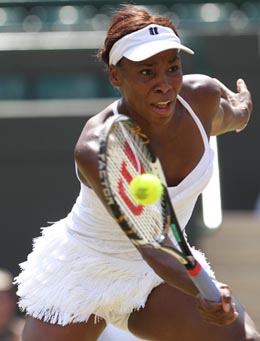 In this June 29, 2010 file photo, Venus Williams returns to Bulgaria’s Tsvetana Pironkova during their singles quarterfinal at the All England Championships at Wimbledon. [AP/YONHAP]

EASTBOURNE, England - Fit again after the toughest injury layoff of her career, Venus Williams on Saturday insisted that a sixth Wimbledon title is well within her reach despite more than four months off the circuit.

The 30-year-old Williams will play her first match since January at the Eastbourne International grass-court tournament next week after recovering from a hip injury.

She will be joined at the Wimbledon warm up in the southeast of England by younger sister Serena, who hasn’t played since winning a fourth singles title at the All England Club nearly a year ago.

Many players would be happy to simply ease themselves back into competitive action but that attitude isn’t in the Williams sisters’ psyche.

“In terms of winning these tournaments, that’s what we are here for,’’ Venus said. “We’re not here for results so we are going to do our best to take home two titles on this road.

“Whether it can happen ... remains to be seen. But that’s what we aim for every time we hit the court.’’

It says a lot about the state of women’s tennis that the sisters will be considered genuine title contenders for Wimbledon should they emerge unscathed from Eastbourne.

Caroline Wozniacki of Denmark is the current No. 1 but hasn’t won a grand slam title and the top of the rankings has a hollow look to it without the names Serena or Venus.

Venus dismissed the notion it would reflect badly on the women’s game if her or Serena won Wimbledon despite their lengthy absences.

“At the end of the day, 10 years from now, no one is going to remember, ‘Oh poor V, she was injured’ or ‘poor X player.’ It’ll just say Wimbledon title, hopefully with my name on it. And that’s all that matters,’’ Venus said.

Andrea Petkovic will be Venus’ first-round opponent at Eastbourne, where the American last played in 1998 when she lost to Natasha Zvereva in her opening match.

Petkovic was Venus’ opponent when she had to retire from a third-round match at the Australian Open, her last competitive appearance on tour.

“I can’t believe I finally made it back,’’ she said. “It’s been a very long road. I can’t tell you how excited I’ve been to come and play and just be playing any first-round match anywhere.

“I never could have foreseen the amount of time I had to take off. There were some frustrating moments but I never let it get me down.’’

Serena, a 13-time major winner, could be more rusty than her older sister.

Shortly after her latest Wimbledon victory, she cut her foot on glass at a restaurant in Germany but played in an exhibition match against Kim Clijsters days later in Belgium.

When she returned to the United States, she had the first of two operations for the injury before being diagnosed in February with blood clots in her lung. She said she needed treatment for a hematoma - a gathering of blood under the skin - on her stomach.

She returned to practice in April and will open her Eastbourne campaign against Bulgaria’s Tsvetana Pironkova.

“I had no idea that she was going to make it back,’’ Venus said of her sister, who is currently No. 25. “It’s pretty ironic that we had the opportunity to be here at the same time.