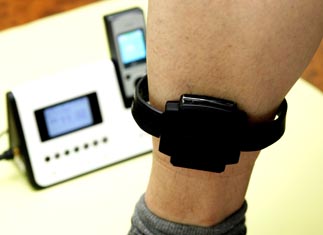 A convicted sex offender who was cuffed with an electronic monitoring anklet allegedly committed more sexual assaults, Gangnam police said yesterday, raising doubts on the effectiveness of the security devices.

Police said the offender, identified by the surname Jeong, had been sentenced to five years in prison in 2005 for rape and was released in October 2010. Since then, he has been on probation and has been wearing the monitoring anklet.

According to police, after he was released, Jeong lived in a two-room apartment arranged by a religious group, where his wife and five homeless people were already living.

In his new home, police said, Jeong sexually assaulted a 10-year-old girl, and raped a 47-year-old homeless woman three times in February and March. He also sexually assaulted the woman’s 21-year-old son, who reported him to the police Tuesday. Police arrested Jeong Tuesday.

“We were worried that Jeong would commit additional sex crimes, so we issued an emergent arrest warrant, which is an exceptional case,” a police official said. “Jeong was detained until an official arrest warrant was issued [by a court] two days later.”

Police said there was no way to detect Jeong’s alleged sexual assaults, because they were done within his permitted radius of movement.

“The electronic ankle alerts police when the criminal removes it out or moves outside the permitted zone,” a police official said. “If a sex criminal commits a crime within the zone, we can’t block him from doing it,”

The monitoring anklet was adopted in 2008 but a string of sex crimes have occurred by ex-cons wearing them.

On May 24, a 38-year-old sex offender identified as Kim was arrested on a charge of sexually assaulting a 22-year-old female student sleeping on a bus. Kim was wearing his anklet at the time, police said. In April, police in Jeonju, South Jeolla, arrested a sex offender in his 40s who removed the anklet and tried to flee.

In an effort to decrease the number of sex crimes and pinpoint the location of wearers, the Ministry of Justice in 2008 started cuffing sex offenders who received two or more jail terms for sex crimes; people who repeated a sexual offense within five years after their release; and people convicted of sexual crimes against a minor under the age of 13.