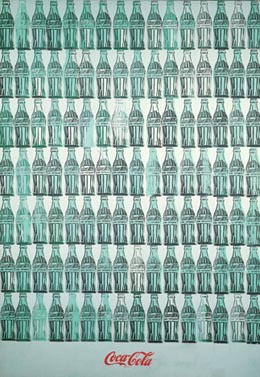 A room in the Deoksu Palace branch of the National Museum of Contemporary has become a bastion of American art with works such as Andy Warhol’s (1928-1987) well-known “Green Coca-Cola Bottles” and “Campbell Soup Cans,” Roy Lichtenstein’s (1923-1997) “Still Life with Crystal Bowl” and Wayne Thiebaud’s (b. 1920) oil painting “Pie Counter,” which hangs over Warhol’s three-dimensional “Brillo Boxes” on the floor.

These Pop Art works are part of the exhibition “American Art” going on until Sept. 25 at the Deoksu Palace branch of Korea’s National Museum of Contemporary Art, or MOCA. The show presents a total of 87 works by 47 artists from the Whitney Museum of American Art. This is the first time that an exhibition of the U.S. museum’s collection has been held in Asia, according to the Korean museum.

The show also has Man Ray’s (1890-1976) Dadaist works, including the famous metronome with the cutout photograph of an eye on the pendulum titled “Objet Indestructible,” and Dan Flavin’s (b. 1933) untitled sculpture made of commercial fluorescent light tubes, which is often labeled as Minimalist or Conceptual Art.

The exhibition is titled “Object,” after the works of French Dadaist and Surrealist artist Marcel Duchamp. Accordingly, the show excludes Abstract Impressionist works by artists such as Jackson Pollock (1912-1956) and instead features familiar objects reproduced as fine art including works from Claes Oldenburg’s (b. 1929) “Soft Version” series. 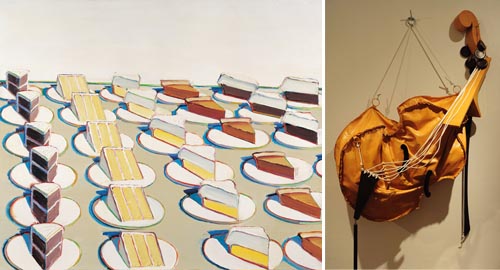 Andy Warhol’s silk screen “Green Coca-Cola Bottles” (1962), top, Wayne Thiebaud’s oil painting “Pie Counter” (1963), above left, and Claes Oldenburg and Coosje van Bruggen’s sculpture “Soft Viola”(2002), above right, are part of the “American Art” show at the Deoksu Palace branch of Korea’s National Museum of Contemporary Art in central Seoul. The exhibition continues until Sept. 25.
All of the works are from the collection of the Whitney Museum of American Art in New York and show new perspectives on common objects. Provided by the Whitney Museum of American Art and MOCA


Park Young-ran, the curator of the Korean museum, described how Marcel Duchamp’s found objects, which he called “readymades,” transformed the ordinary into art.

“Marcel Duchamp stripped ‘objects’ of the banality associated with their everyday use and instead suggested they could be something of artistic value,” Park said.

“People will find many of the things recognizable and can use that recognizability to get something a little bit deeper in American art,” Carter Foster, the Whitney’s curator of drawings, told reporters at a press preview at the Deoksu Palace museum last Friday.

The section also has two works on commercialized sex - the synthetic polymer and paper collage “Great American Nude” by pop artist Tom Wesselmann (1931-2004) and the photograph “Girl with Dolphin and Monkey” by contemporary artist Jeff Koons (b. 1955).

The works on display in the second section, “Object and Identity,” move away from cultural commentary and instead connect an object with its identity.

It features works by Jasper Johns, Robert Rauschenberg (1925-2008) and Jim Dine (b. 1935), all of which look like large abstract paintings at a distance but actually fuse figurative and abstract art with the found objects attached to them.

“Clad in the mantle of Neo-Dada, Jasper Johns and Robert Rauschenberg engaged with real objects with the intention of pursing objectivity and repudiating the subjectivity of Abstract Expressionist art,” MOCA explained in a statement.

The third section, “Object and Perception,” shows works related to Surrealist art in their use of “depaysement,” in which the sizes of common objects are distorted or the objects are combined with each other in unexpected ways, arousing odd and mysterious impressions. Man Ray’s eye-metronome “Objet Indestructible” and Claes Oldenburg’s anthropomorphic objects such as “Giant Fagends” are here.

There is also a separate section dedicated to the development of American Modernism in the early 20th century with works by famous names like Edward Hopper (1882-1967) and Georgia O’Keeffe.