An to join ranks of Gandhi, MLK in U.S.

An to join ranks of Gandhi, MLK in U.S. 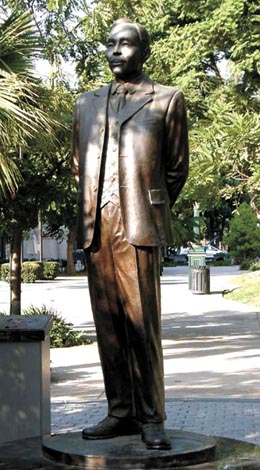 An Chang-ho’s statue stands in a park in front of Riverside City Hall in California. By Lee Jong-won

Korean independence activist An Chang-ho (1878-1938) will become the first East Asian to be inducted into the International Civil Rights Walk of Fame in Georgia on Jan. 6, 2012.

The King Center’s civil rights walk of fame is apart of the Martin Luther King Jr. National Historic Site in Atlanta, Georgia. It gives recognition to those who sacrificed and struggled to make equality a reality.

A bronze statue will also be constructed in An’s honor at the King Center, which, when completed, will be the second statue of An in the United States. The first was erected in a park in front of Riverside City Hall, California. The new statue will be placed next to Mohandas Gandhi’s statue.

The most recent honor for An is the result of months of planning by the Young Korean Academy, which was founded by An in 1913, and the Trumpet Awards Foundation, which sponsors the walk of fame.

In May, members affiliated with the Young Korean Academy met up with Trumpet Awards’ Executive Producer Xernona Clayton in Atlanta, where they discussed and shared ideas on An’s induction and the erection of a bronze statue.

The walk of fame was established in 2004 in the birthplace of Martin Luther King Jr. The institution that now bears his name symbolizes freedom, equality and human rights. People from all over the world visit to pay tribute to historical figures who sacrificed themselves in the name of equality. 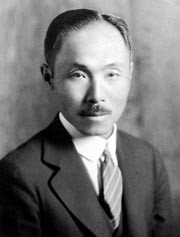 People such as Bill Clinton, Jimmy Carter, Lyndon Johnson, Rosa Parks, Stevie Wonder and Jesse Jackson are represented there. So far, 34 people have their footprints on the walk of fame.

“We wanted to give wider publicity to An’s achievements as an individual and an educator,” a Trumpet Awards representative said. “We hope this will help reinforce ties between the Korean community and the African American community in the United States.”

The Young Korean Academy recently wrapped up discussions with the Statue Construction Preparatory Committee and the Supporters’ Association, aiming to complete the statue by the end of 2013, which will also be the 100th anniversary of the academy.