Sharapova back at Wimbledon

Sharapova back at Wimbledon 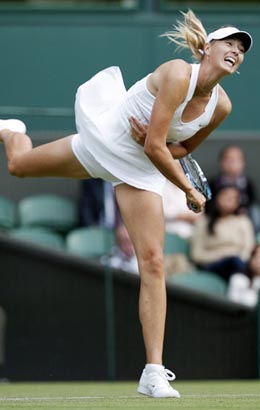 Maria Sharapova serves to Anna Chakvetadze during their first round Wimbledon match at the All England Club in London, Tuesday. [EPA/YONHAP]

LONDON - Former champion Maria Sharapova admits winning a second Wimbledon title would be the perfect way to erase the painful memories of her injury woes.

Sharapova has struggled with a host of ailments over the last two years that caused her ranking to slip and raised questions about her ability to continue to compete for the sport’s top prizes. But the 24-year-old has always possessed a competitive spirit and that desire to get back to her best has driven the Russian to successfully overcome her injury problems.

Sharapova, who first won Wimbledon as a 17-year-old in 2004, is back up to sixth in the world rankings after a fine run to the French Open semifinals, and the fifth seed began her latest campaign at Wimbledon with a 6-2, 6-1 demolition of compatriot Anna Chakvetadze.

Already one of the favorites for the title, Sharapova conceded it would be a dream come true to win her first Grand Slam crown since the 2008 Australian Open.

“Of course it’s important. It would be a wonderful achievement. But I’m really happy to be playing something that I really love,” Sharapova said. “I think time will tell and you just have to be patient and work as hard as you can and give it all you have, and then the rest will take care of itself.”

Although Sharapova was delighted to be back at Wimbledon, she was more relieved to emerge unscathed from a potentially tricky first-round match.

“I thought [Chakvetadze] played a really good match, and I really had to step it up. I thought I did a good job of that.”