The driving force behind the Korea National Ballet

The driving force behind the Korea National Ballet 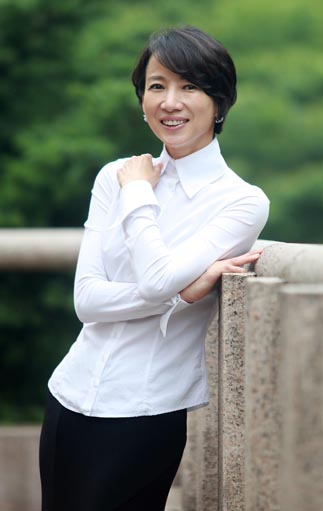 When Choi Tae-ji returned to the helm of the Korea National Ballet in 2008, she was 50-years-old. That age in Korea is referred to as “jicheonmyeong,” which is translated to “realizing heaven’s command.” Her leadership of the prestigious company has certainly proven the expression is appropriate for her.

Although she had previously served five years in the position, from 1996 to 2001, it was only when she reached 50 that she knew what she could and wanted to do. She offered to resume her leading role at the KNB, after having been a principal member of the company from 1987-1992, and her three-year contract was extended earlier this year.

“Private ballet companies all agree on the importance of promoting ballet and staging quality works, and they have increasingly joined forces to do so. But as head of a national troupe, I knew I needed to work with the government to bring systematic change to the way ballet is administered in Korea,” she said in an interview last Wednesday at the KNB office in the Seoul Arts Center, southern Seoul.

Since 2008, Choi has been outspoken about establishing a ballet school funded solely by the government that would educate and train 10 to 18-year-old professional ballet dancers-to-be. That way, Choi said, “Korea will be able to identify and foster dancers like Billy Elliot.”

Her efforts to persuade the government - bolstered by a recent ballet boom that led to the unprecedented sell-out of the KNB’s “Giselle” this February - seems likely to bear fruit soon.

The Ministry of Culture, Sports and Tourism recently launched a feasibility study of her plan. And her relentless pursuit of expanded government funding has quadrupled the government’s annual support from 1.8 billion won ($1.65 million) in 2008 to 7.5 billion won last year, and the KNB was given an unlimited supply of pointe shoes starting early last year.

The Kyoto-born artistic director, who still speaks with a slight Japanese accent, is currently trying to find common ground with the Ministry of National Defense to accommodate male ballet dancers during their military service. (Currently, only first and second place winners in international ballet competitions are eligible for an exemption from their mandatory two-year military service).

Another longer-term goal of hers is for the KNB to have its own resident orchestra.

“I have no regional or school loyalties here in Korea, which is why I worry less about offending people [government officials and ballet administrators] when I’m trying to secure the things the company needs,” she said.


Q. Ever since you were reappointed to your current position in 2008, you have said it is imperative for Korea to establish a state-run ballet school. Has you seen any progress on this? 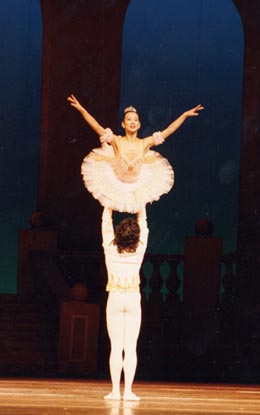 Choi dances in the “Nutcracker” in 1993 as a principal dancer of the Korea National Ballet. [JoongAng Ilbo]

A. The discussion on whether such a ballet school is necessary or not is already done. What is ahead of us now is developing a good school. I am not sure what the Culture Ministry is thinking now but I want it to be located outside of Seoul. I want the academy to have a dormitory, a spacious playground and a theater, and I want students to be able to dance in fresh air. The academy will hopefully employ full-time nutritionists and therapists for students’ physical and mental health. When it’s time to recruit students, we intend to tour the country seeking those with potential. Our criteria will be based on physique and movement, not previously acquired skills.

For parents with children who want to be ballet dancers, the tuition is extremely expensive. But when we have the school, parents won’t need to worry about private education costs, and children in outlying regions with limited access to ballet schools will have a chance to be dancers. Unlike music, ballet doesn’t realistically have prodigies because you need to wait and see how the body develops after adolescence.

The academy will cover the upper three grades of elementary school and the six years of middle and high school. Students at the academy may choose to enter the KNB after graduation but they may also choose to become musical actors or dancers in other genres. They could also continue their formal education at university.

There are fewer male ballet dancers in Korean ballet companies than there are women (at the KNB, 41 percent of the dancers are men). Why do you think that is so?

A lot of people in Korea still think that ballet is a job for women. But ballet actually originated from the court in the Renaissance period and the world’s first ballet star was King Louis XIV. It was when ballet later blossomed in Russia that men took the role of partnering the ballerina. Male ballet dancers take the central role in many of the ballets created in the early 2000s and onward. For instance, in “Tchaikovsky: the Mystery of Life and Death” (by Russian choreographer Boris Eifman), which was staged here a few days ago, the main character is a man.

The best way for more men to choose ballet as a vocation would be to raise dancers’ salaries in general. Sports superstars earn several hundreds of millions of won a year and that’s why more and more people want to become athletes. I think some star dancers should also receive the cash reward they deserve. KNB members’ salaries have increased and we also have an incentive system. The more they take the stage, the more they earn. The dancers now have salaries proportional to their ability and status - from the principals to the corps de ballet.

You have also advocated for the KNB to have its own performance hall and orchestra. Why do you feel these are important?

After the KNB was separated from the National Theater of Korea and transformed into one of the Seoul Arts Center’s resident companies in 2000, the government has been providing 75 percent of our annual budget and we earn the remaining 25 percent through ticket sales. The KNB consists only of dancers and a small administrative staff. Although most of our performances are held at the Seoul Arts Center Opera House, the reality is that each time we perform we need to apply for rent from the SAC. We also have to contract with different backstage staff and orchestra members. It’s very time consuming. Some may say that we’re already receiving too much government funding, but we’re not, and that’s why tickets can cost more than 100,000 won ($92). I think Korea has now reached the stage where we need a performance hall exclusively devoted to opera and ballet year round and the Culture Ministry seems like it’s beginning to understand us.

Do you still dance?

Since I was appointed to the artistic director position at such a young age (37-years-old), I tried to refrain from appearing too much like a dancer. And I thought it would make it more difficult for me to lead the company if I missed my past too much by continuing to dance. But when I see my dancers on stage, I still dance in my heart. To stay fit I do Pilates, yoga and weight training at least once a week. Some people say I’m still very lean like a ballerina but that’s actually because I’m always in constant state of tension.

What has been the most challenging thing about making the transition from professional dancer to full-time administrator?

Like most artists, I was selfish, so I had a difficult time changing my mindset. When I was first appointed as the artistic director of the KNB, I had the most difficult time. I had to deal with the language barrier (Choi learned Korean after joining the KNB) and had no personal network because I didn’t go to school here. When I was angry and stressed I used to relieve the tension by dancing but I could no longer do that either. I also had to bear the stress of having my position reverse completely: Suddenly I was in a position that I had once ridiculed. Some may think the artistic director is the No. 1 person in a ballet company, but I had this idea that being on stage was much more honorable. Also, I had to deal with not being able to fully devote myself to my two daughters when I was in my 30s and 40s, like most other mothers. But thankfully the people around me, including my mother, always encouraged me. I had many moments when I felt like killing myself. I also felt a responsibility to the next generation of ballet dancers. Before turning 50, I just did what I was told but now I know what to do. I want to let people under 50 know that they will eventually know what path to take.

Although ballet is popular now, there are still many people who find it difficult to understand. How would you respond to that?

You might feel better if you knew that even we ballerinas get bored watching a two-hour-long ballet. If you are overly burdened by the thought of having to get dressed up and watch something serious, why not start with less serious pieces at smaller theaters? You can find a number of rather casual ballet works on the Web. That way you can build a basic knowledge of ballet. I also recommend you study the story of the ballet before going to a performance. If you know the plot, it is much easier to understand. Lastly, I want the audience to immerse themselves in the music. Ballet choreography is basically built upon the music. “Carmen” is based on music by Georges Bizet, “Raymonda” by Alexander Glazunov, and “Swan Lake” by Tchaikovsky. The music is so important that we have engaged maestro Chung Myung-whun and the Seoul Philharmonic Orchestra for our production of “Romeo and Juliet” scheduled for Oct. 27-30. It will be the first time that the prestigious orchestra will be accompanying a performance. I have been pestering maestro Chung about that for the past three years.

Born in 1959 in Kyoto to Korean parents