Enriched by Korea’s love of luxury

Enriched by Korea’s love of luxury 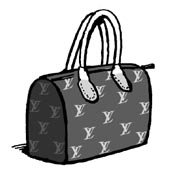 Luxury goods are surrounded by an aura of dreams and fantasy. Many buyers of these products believe that the status gained by acquiring a certain product justifies the price, an idea best summarized by L’Oreal’s advertising slogan, “Because I’m worth it.”

In 1956, the U.S. magazine Life featured a photo of Grace Kelly, princess of Monaco, hiding her pregnant belly with a bag. After it was learned that French fashion house Hermes made the bag, the “Kelly bag” sold briskly. Similarly, screen legend Marilyn Monroe gave cult status to Chanel No. 5. The perfume became widely popular after the actress was asked what she wore to bed and she replied, “Why, Chanel No.5, of course.”

Women could share the sweet fantasy that they, too, could become Grace Kelly or Marilyn Monroe by holding a Hermes bag or wearing Chanel perfume.

The concept of conspicuous consumption says that spending is an expression of social status and dignity. Proposed by American economist Thorstein Veblen, the concept says that people try to show off their wealth and status by purchasing expensive items.

Luxury goods are widely consumed in Korea. Purses made by Louis Vuitton and Gucci have gained the nicknames “three-second bag” and “five-second bag,” respectively, because they are so common that you can spot one every three to five seconds in downtown Seoul.

The main factor driving the growth of the luxury market in Korea is said to be peer pressure. Koreans tend to be sensitive to what others think and try to show off their status. Thus, many fashion houses thrive in Korea by raising prices and emphasizing scarcity. It is a strategy that relies on impulse spending as people try to compensate for a lack of confidence by buying expensive items. In the latest trend, people are buying increasingly rare items to set themselves apart. These buyers of “uber-luxury goods” think they are pursuing only the best.

But this has left Korean companies struggling to compete with European fashion houses. This year, Bernard Arnault, the chairman and CEO of LVMH, was named the fourth richest man in the world, with $41 billion in assets. And with the Korea-EU free trade agreement going into effect on July 1, sales of luxury goods in Korea have risen on the back of lower tariffs. I hope Arnault knows just how much Koreans’ love of luxury has contributed to his wealth.