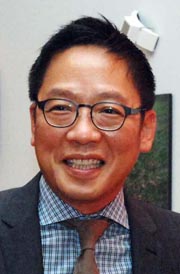 NEW YORK - It may sound strange, but a museum might be the best place to network with the world’s leading financial companies. At least, it’s true for Chung Tae-young, chief executive officer of Hyundai Card and Hyundai Capital.

Chung is treated like a VIP when he visits the Museum of Modern Art (MoMA) in New York. He’s one of a handful of sponsors who can enter the office of Glenn D. Lowry, MoMA’s director, any time.

Hyundai Card, a subsidiary of Hyundai Motor Group, has been a MoMA sponsor since 2006. After becoming a friend of the director, Chung became acquainted with top executives of Kohlberg Kravis Roberts & Co., one of the three biggest private equity funds in the world, and investment banks including Goldman Sachs and UBS. Chung has also gotten to know Martha Stewart, the American homemaking queen, through a MoMA event.

“Not only in New York but also in London and Paris, if you are a sponsor of MoMA, it is considered prestigious,” Chung said. “Especially in developed countries, cultural marketing has a bigger effect than I ever imagined.”

On Tuesday in New York, Chung attended the press opening of “Talk to Me,” a MoMA exhibition full of creative new ideas.

“Just as Hyundai Card made its reputation by hiring professional designers to design its credit cards, we decided to sponsor the exhibition because it has a unique design concept,” he said.

Hyundai Card’s relationship with MoMA began in 2006. In the beginning, it was difficult to approach the museum. It was almost impossible to connect with MoMA’s exhibition department.

Instead, the card company contacted the museum’s souvenir shop and opened an online shop for Koreans. After two years, Hyundai Card was able to sponsor MoMA’s first exhibition in Korea titled, “Everyday Marvels of Design” in 2008, held at the Hangaram Design Museum.

In 2009, Hyundai was able to introduce the work of 30 young Korean designers through an event titled “Destination: Seoul” at the museum’s design store.

Thanks to Hyundai Card’s history with the museum, MoMA visitors who have a Hyundai credit card can receive three free tickets. Such benefits were originally given to employees of sponsor companies, but the museum offered the free admissions to Hyundai’s credit card members.

Chung plans to upgrade the company’s relationship with MoMA.

“Rather than just sponsoring, we would like to introduce Korean artists in the United States. MoMA is considering an exhibition for Korean artists,” Chung said.”