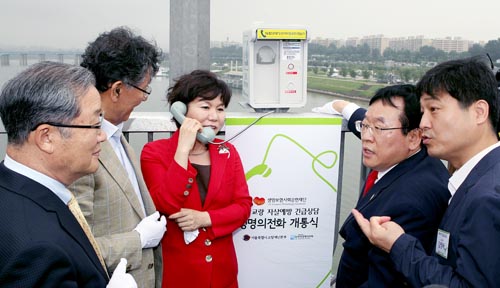 Cho Eun-hee, deputy mayor of Seoul, yesterday demonstrates one of eight hot line phones set up on Mapo and Hannam bridges in Seoul to help prevent suicides. The Life Insurance Philanthropy Foundation set up the hot line phones on bridges where the suicide rates are the highest along the Han River. The foundation said it hopes that the phones will help people contemplating suicide to rethink their decision. [YONHAP]