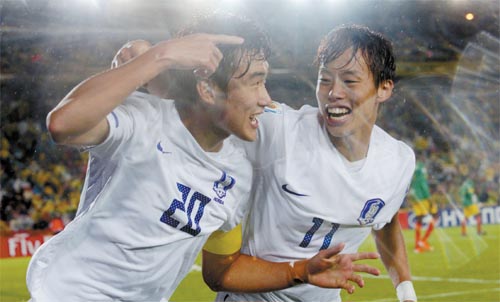 Korean U-20 captain Jang Hyun-soo, left, celebrates with Kim Kyung-jung after scoring a goal during their U-20 World Cup group A match against Mali in Bogota, Colombia, Saturday. Korea beat Mali 2-0 with goals from Kim in the 50th and Jang in the 80th on a penalty kick. Korea picked up three points in Group A, but is second on goal differential behind host Colombia, which beat France 4-1 on the same day. Korea plays against France on Tuesday in Bogota, while Mali meets Colombia. [YONHAP]