LEANING AGAINST A GATEPOST IN THE WORLD OF IMAGINATION 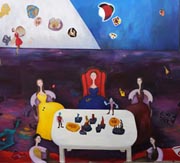 To Aug. 13: This solo exhibition by Yang Soon-yeal, whose works focus on love, dreams, happiness and the hopes of mankind, depicts basic human values using broken chairs and abstract paintings.

The main piece, an oil painting titled “Dream & Love” (2011), was drawn using a vast array of techniques that the artist compiled over his 20-year career.

This was not the case for his piece of installation art named “Father’s Chair,” which is dedicated to all of Korea’s forefathers who contributed to building the country. Meanwhile, “Uncomfortable place” encourages people to think about the persistence and courage of Koreans who are toiling to industrialize the nation.


WHO CAN SAY WHAT?

To Aug. 21: This solo show features over 20 new works by Ci Kim, who is also exhibiting his paintings and instillations at the Arario Gallery, which he owns, in Cheonan from July 14 to Aug. 21.

Common themes include how one’s understanding of self meets and intersects with various sociocultural institutions.

As such, Kim uses various media, including large sculptures, to challenge what he sees as society’s prejudice and misunderstanding about his newfound career as an artist.

His work draws on past social scandals, through which he strives to answer questions about the self.

To Aug. 25: For his debut solo show in Korea, Japanese artist Hiraki Sawa takes everyday objects such as furniture and toys, and intersects them with iconic elements to create a new reality. Sawa uses digital photography and editing to scale the objects down to a fraction of their original size in order to show how they are bound to disappear in the future.

The artist’s creative interpretation of everyday objects and spaces gives viewers a fairy-tale-like experience unshackled by the constraints of logic. 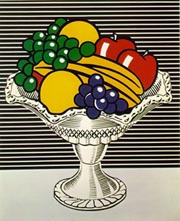 To Sept. 25: Pop Art by Andy Warhol and Roy Lichtenstein, together with Man Ray’s Dadaist works, are among the 87 works by 47 artists shown in this selection of works from the Whitney Museum of American Art. Titled “Object” after the works of French Surrealist Marcel Duchamp, the show also features pieces taken from Claes Oldenburg’s “Soft Version” series. This is the first time the U.S. museum has shown parts of its collection in Asia.

To Sept. 25: For the first time in Asia, viewers will get a chance to see some of the sketches, storyboards, photographs and more behind Disney’s classic animations of the last 80 years.

The Walt Disney Animation Research Library has provided 600 pieces for the show, which is divided into nine sections corresponding to the most beloved Disney films. It includes works by famous illustrators Mary Blair and Kay Nielsen.

The exhibition begins with the entertainment giant’s first animated feature film, “Snow White and the Seven Dwarfs” (1937), and ends with the 3-D film “Tangled” (2010), its latest take on the classic tale of Rapunzel.