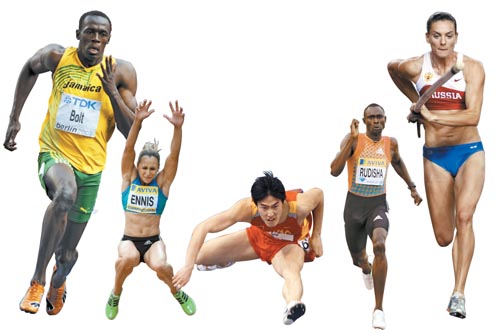 
All eyes will be on Usain Bolt in the coming days as the Jamaican, who has breathed new life into track and field after years of waning appeal, sets about achieving what many consider his impossible mission of seizing a hat trick of gold medals in Daegu.

As Korea welcomes the IAAF Athletics World Championships for the first time tomorrow, Bolt is the undisputed lead actor in a stellar cast of world champions past, present and future, including Russian pole vault queen Yelena Isinbayeva.

The hype machine for the event and its cast has been building for months. Now they, along with the city and the organizers of the biennial tournament, will be put to the test as Daegu launches into nine days of world-class athletics action.

Tomorrow's opening-day action begins early with the women's marathon at 9 am, and wraps up after the women's 10,000m final more than 12 hours later. In between, organizers will find time to stage numerous heats in various disciplines as well as an elaborate opening ceremony.

In fact, the colossal affair features a crammed itinerary of events designed to test the speed, strength and durability of 1,945 athletes from 202 countries in a total of 47 events.

Many will be watching to see how the stars shine, and how fresh faces make their mark, less than one year before the granddaddy of world sporting events, the Summer Olympic Games, returns to London for the third time next July and August.

In Daegu, new world records will be set, reputations will be created, and some potentially destroyed, and national pride will be at a premium for all involved.

The time has finally arrived to watch the greatest athletics show on earth. In order to maximize your enjoyment of the various competitions, it may help to familiarize yourself with how the stars have been performing this year, and what is expected of them in the coming days.

Can Bolt nail a back-to-back triple?

Even before it has started, Bolt is without question the star of the show. Few moments in sport in recent memory have been as electrifying as his performance at the blue-ribbon 100 meters in Beijing in 2008. But the Jamaican has already shown that he does not reserve his best times for the Olympics.

Bolt is gunning for three world titles in the 100 meters, 200 meters and 4X100-meter relay but a spate of injuries last year may darken his chances of success.

Bolt will first appear in heats for the 100 meters on Saturday evening before - unless disaster strikes - he takes his place in the final at 8:45 p.m. on Sunday. The men's 200m final is scheduled for 9:20 p.m. next Saturday and the relay event for Sept. 4, on the final day of competition.

If the 25-year-old 'Lightning Bolt' can sweep all three, it will be nothing short of incredible. If he can reprise the feat he achieved in Berlin two years ago, when he set new world records in the 100 meters (9.58 seconds) and 200 meters (19.19 seconds) before bagging the relay gold, he could end up displacing reggae star Bob Marley as the Caribbean nation's favorite son. If he wins the two individual sprints, he will become the first athlete to ever bag these two back-to-back titles at the Worlds.

But this is far from a foregone conclusion. The sprinter injured his back and one of his Achilles tendons last year and has admitted it will be difficult for him to rewrite his personal best. In fact, Bolt has only managed 9.88 seconds in the 100 meters this year for the sixth best time of the season.

“I am trying to defend my titles. That’s my aim,” Bolt said in an interview with Yonhap News Agency last weekend. “I want to show the world that I may be coming back from injuries, but I am still the best.”

The good news for Bolt is that a major threat in the 100 meters, American Tyson Gay, will not be present due to a hip injury, while American Mike Rodgers and Jamaican Steve Mullings both failed doping tests in recent weeks. Gay was second in this season’s rankings, posting a fastest time of 9.79 seconds.

He may have mixed feelings, however, about rumors that his teammate and rival, 29-year-old Asafa Powell, could skip the 100 meters due to injury. Powell's agent allegedly made comments to this effect yesterday evening. Previously, Powell was considered the most likely inheritor of Bolt’s throne, should the latter falter. He has beaten 10 seconds on 73 occasions and owns the fastest time of the season (9.78 seconds), making him the wolf at the door.

Has Liu laid his demons to rest?

While Bolt is trying to extend his legacy, China's 110m hurdler Liu Xiang is hoping to bounce back and restore his reputation in Daegu. The 2004 Olympic and 2007 world champion missed the previous Worlds and Olympics due to an Achilles injury but is out to prove he still has enough gas in the tank to pull out another corking performance.

However, he will have to overcome David Oliver of the United States and Beijing Olympics champ Dayron Robles of Cuba for another taste of the title. Oliver is the only man to go under 13 seconds this year, when he matched Robles' world record of 12.87 seconds.

Another star on the way back is 29-year-old Isinbayeva, the only female to pole vault higher than five meters. The 29-year-old Russian fell apart in Berlin and the temporary rain cloud soon turned into a season-long drought. More bad luck fell her way when she suffered a minor wrist injury recently, but the three-time World Athlete of the Year still has a great shot at claiming the title and breaking her own world record of 5.06 meters in the process.

At least two athletes have stolen the spotlight in Daegu despite having almost no chance of medaling.

For double-amputee Oscar Pistorius of South Africa and vision-impaired Jason Smyth of Ireland, they are just thrilled to be participating against able-bodied athletes at the highest level.

The 24-year-old Pistorius, who runs on carbon-fiber blades and goes by the nickname “Blade Runner,” will race in the 400-meter sprint on Sunday. However, his personal best of 45.07 seconds makes him the season's 18th-best performer. He will also feature later in the 4x400-meter relay.

“This will be the highest-profile and most prestigious able-bodied event I have ever competed in, and I will face the highest caliber of athletes from across the planet,” Pistorius told the JoongAng Ilbo earlier this month. “If I manage to make it through the heats, I would be thrilled.”

Meanwhile, Smyth, who is partially blind, will be competing in the 100 meters. The 24-year-old inherited a disease that affects his retinas when he was eight. His personal best this season is 10.22 seconds.

Two-time world champion Blanka Vlasic of Croatia, 24, will compete in the high jump despite partially tearing a muscle in her left leg before the Worlds. Last year’s World Athlete of the Year has the second highest record of 2.09 meters.

Meanwhile, shot putter Valerie Adams of New Zealand will be looking for her third straight title, while two-time Olympic champion Andreas Thorkildsen of Norway is hoping to defend his javelin crown. British triple jumper Phillips Idowu also has scant intention of giving away his title easily - a sentiment shared by fellow Brit Jessica Ennis as she goes for a second heptathlon gold.

In Africa, 800-meter world-record holder David Rudisha of Kenya and Ethiopia's Kenenisa Bekele are the men to watch. The 29-year-old Bekele has not competed since January due to a muscle tear in his right calf, but he has dominated the 10,000 meters for nearly a decade and picked up the 5,000-meter and 10,000-meter titles in 2009.

Korea will probably end the Worlds as the third host nation to fail to win a medal, which is why it has set its sights lower. The team's so-called “10-10 project” aims to get 10 athletes into as many finals, with triple jumper Kim Deok-hyeon seen as the hottest prospect.

In the marathon, last year’s Asian Games champion Ji Young-jun was not included in the roster due to injury, but Jeong Jin-hyuk will fill her shoes. The 21-year-old’s personal best is 2 hours, 9 minutes and 28 seconds. Kim Hyun-sub is another figure to watch in the men’s 20-kilometer race walk.

Only 21 of the 63 Korean athletes earned their right to participate in the Worlds by passing the standard records set down by the IAAF. Others got their berths due to certain privileges reserved for the host nation.