Time is right for Daegu to boost measuring tech

Time is right for Daegu to boost measuring tech 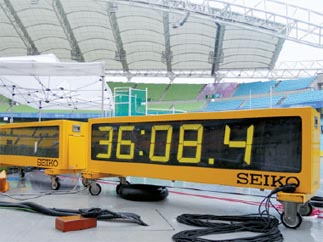 In competitions where hundredths of a second count and millimeters matter, organizers have installed cutting-edge equipment to ensure records are accurate and controversies at a minimum.

As such, the starting gun that launches races will be linked to the starting blocks to alert judges of any false starts, courtesy of a sensor installed in the blocks. If short-distance runners get out of the blocks in less than 0.1 seconds, it will be considered a foul as the body cannot react to messages from the brain that fast.

At the finish line, official timer Seiko said its photo-finish system can measure 2,000 frames per second to make accurate calls. This will be boosted by a third camera at the line and two more inside the photo finish room for officials.

For middle and long distance track events, a transponder system will be installed around the track to provide information such as lap speed and the number of laps left.

For events like the long jump and triple jump, an electronic system will replace archaic tape measures. The Video Distance Measurement System, which was introduced at last year’s World Indoor Championships in Doha, Qatar, can measure distances without having to place a prism at the landing point. The distance can be calculated by clicking on the landing point on a computer screen. Discus, hammer and javelin events will use a similar system.