With latest film, Hong Sang-soo makes a return to the familiar

With latest film, Hong Sang-soo makes a return to the familiar 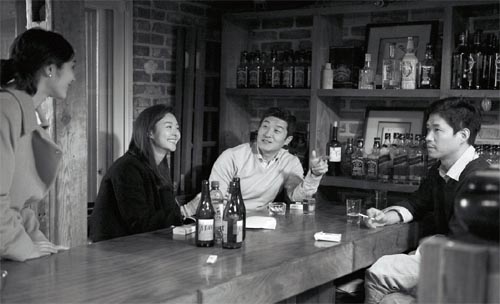 In this still from Hong Sang-soo’s new film “The Day He Arrives,” the central characters talk over a drink at the bar Novel. Provided by Sponge Entertainment


Is director Hong Sang-soo making the same film over and over again?

My answer to that question would be equal parts yes and no.

Take his leading men - creative, burnt out intellectuals who enjoy philosophical musings cleverly disguised as jokes over drinks with friends. The women in his films are oftentimes gullible and flighty but enjoy existential conversations with the male lead.

Usually, the man goes on some kind of trip in Korea, meets women, engages in long conversations, mostly about romantic relationships, sleeps with them and then the two part ways.

Hong’s twelfth film, “The Day He Arrives” is no exception to this central plot line. Seong-jun (Yu Jun-sang) is a has-been director teaching in Daegu. He arrives in Seoul for a brief trip and meets close friend Young-ho (Kim Sang-joong), who introduces him to Bo-ram (Song Sun-mi), a film studies professor. The three frequent a bar named Novel where the pretty owner (Kim Bo-kyung) resembles Seong-jun’s ex-girlfriend. Seong-jun plays piano to get her attention but ends up attracting Bo-ram instead. In the end, Seong-jun manages to woo the bar owner and they sleep together.

With this simple premise, Hong is playing with repetition and the notion of accidental encounters versus fated relationships. From the first day of his trip, Seong-jun keeps bumping into an actress he used to know during his filmmaking days. Seong-jun’s ex-girlfriend and the bar owner are played by the same actress, underlining Seong-jun’s feeling that they are the same person, but are portrayed as two different characters. Both women are quite naive and accommodating of Seong-jun’s rather pathetic parting rhetoric. Both text him with the same words expressing their longing for him.

As the name of the bar suggests, the plot feels like a partly fictionalized account of someone’s memory, a male fantasy of sorts, in which he remembers what he wants to remember. For all we know, Seong-jun’s four- or five-day trip could have happened all in one day, with the events reassembled inside his head.

As for the film’s visuals, the director’s refined style shows through, as he manages to match the tone of his plot to the imagery. Set in Bukcheon, an artistic part of northern Seoul, during winter, his shots feel stark, uninviting and distant, like the nature of the relationships between his characters.

To the uninitiated, Hong’s films may feel like one long film about intellectuals contemplating everything and nothing all at once. But if you argue that point, the same could be said about films by directors like Eric Rohmer or Woody Allen.

For others, however, the director’s seamless and subtle use of his main themes - fate versus coincidence and romantic love versus commitment - woven into the witty dialogue, may be enough. “The Day He Arrives” is not a masterpiece, but for fans, the movie won’t be a disappointment either.

The Day He Arrives