Law firm to be first to set up shop in Europe

Law firm to be first to set up shop in Europe 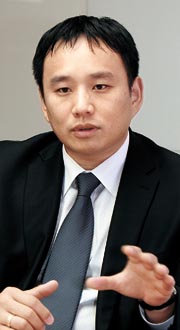 With the European Union now open more than ever to Korea with the start of their free trade agreement, one Korean law firm has quickly jumped into uncharted territory: Europe’s legal services market.

Shin & Kim, a major law firm established in 1981, will be the first to open shop on the continent in Germany. At the center of the endeavor, which will start this October in earnest, is 39-year-old Alexander Son, or Son Dong-wook.

Son is Korean-German, the son of a miner and a nurse who were both sent to Germany by the Park Chung Hee administration. He graduated from the University of Bonn and was admitted to the German bar in Munich in 2001.

Specializing in intellectual property and copyright law, he co-founded Remmertz Son in Munich in 2009 and has been involved in several joint projects between Korea and Germany.

In an interview with the JoongAng Ilbo on Aug. 17 in Seoul, Son discussed his plans for launching Shin & Kim’s new office in Germany.


Q. What is your strategy as the Munich representative of Shin & Kim?

A. In the near future, an invasion of British and American law firms in Korea’s legal services market will become a reality. But we can’t remain worried about how to defend ourselves. Now is the time for us to venture into Europe. Fear decreases when you know their home ground. Only when we can see on the same level as the British and American law firms will we able to have a win-win situation based on mutual cooperation.

What is the significance of this European venture?

Recently there have been lawsuits between Samsung and Apple in progress in roughly 10 countries. If law firms don’t have decent partners in each country, they will lag behind in various issues, including receiving cases.

Just as Korea and China have taken up a greater part of the world’s economy, Asian law firms should also expand their ground.

And you are the son of a miner and a nurse.

Starting in 1963, the Park Chung Hee administration ordered miners and nurses to be sent to West Germany and used their wages to develop the economy.

Son finished the interview saying that his dream while in university of becoming a bridge between Korea and Germany was coming true.

“The undying will and sacrifice made by first-generation immigrants and their enthusiasm for education have helped the second generation now in their 30s and 40s to have a sturdy base in Germany,” Son said.