For many, working in Korea is dream come true

For many, working in Korea is dream come true

Sri Lankans line up in front of the Bureau of Foreign Employment building on Aug. 8 in Colombo, Sri Lanka, to apply for the Test of Proficiency in Korean. If applicants pass the test, they can receive an E-9 visa that allows them to work for three years in Korea. About 8,000 people were able to apply for the test. [YONHAP]

For the past three years, the Bangladeshi native has worked at YG-1, a company that makes cutting tools in Ansan, Gyeonggi, earning 1.6 million won ($1,490) per month.

“In Bangladesh, I couldn’t find a job,” Haruk said. “I want to stay as long as I can in Korea, a country where I can dream the future.”

Last month, local newspapers ran photos taken by Xinhua News showing throngs of Sri Lankans in Colombo queuing to receive application forms that would allow them to work in Korea. Sri Lankan officials reported that over 8,000 people had camped outside overnight.

The photos sparked renewed interest in the country’s foreign labor program, with many Koreans surprised by the sheer number of people hoping to work here.

“There are numerous labor markets for Europeans around the world, but Korea is the only market in Asia, and that’s why foreign workers flock to the country,” said Yoo Gil-sang, professor at Korea University of Technology and Education.

For many companies, foreign labor is a godsend. 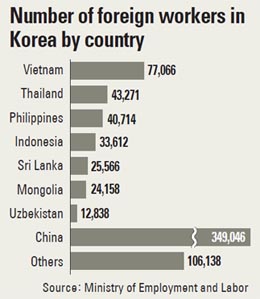 Haruk’s supervisor, Noh Seon-ho, says that guest workers from abroad are willing to do the difficult jobs young Koreans won’t do. Among his 50 workers, 24 are foreign. “They work so diligently,” Noh said, adding that he wanted to express his gratitude.

Foreign guest workers in Korea have reached 710,000 this year, the highest ever, according to Min Gil-su from the Ministry of Employment and Labor. “There is an endless line of foreigners hoping to work in Korea since they can earn an average of 10 times more than in their home countries,” Min said.

The ministry says it receives endless requests from countries asking to expand the number of foreign workers accepted by Korea.

Korea permits foreign laborers from about 15 countries, including Vietnam and Bangladesh, to work on three-year visas, though it places a quota for each country, depending on the number of illegal immigrants from the country and on how well the nation’s immigrants abide Korea’s laws.

The government’s restrictions have made competition to work in Korea fiercer in these 15 countries, with tens of thousands taking the Test of Proficiency in Korean (Topik), which is the first step to working in Korea.

“For last month’s test in Nepal, where 3,000 applicants are to be accepted, 50,000 people applied for it,” Park Chan-seob, of the Human Resources Development Service, said. About 10,000 people will sit down to take the Topik in Mongolia and Uzbekistan next month. Korea admits about 1,000 workers a year from the two countries.

“Foreign workers have to pass the Topik in order to be included in the employment pool,” said Kim Chan-ho, director of the Migrant Center. “But these workers have to wait one or two years to be selected by business owners in Korea.”

Currently, about 90 percent of the 710,000 foreign workers are employed by small and midsize companies, which have about 30 employees, while the rest work in farming and fishing villages.

Businesses say that they hire foreigners not because of lower wages but because there are no Koreans who apply for the job.

A 41-year-old Filipino worker at U-Tech says that it seems Koreans don’t want jobs at companies that require difficult labor. “For us, you can never say no to a job that offers 1.5 million won per month,” he said.

But with increased foreign labor comes worries from some people that guest workers are taking away jobs. Yet the government says small and midsize companies have strongly pushed to permit more foreign workers into the country, adding that the quotas are adjusted to ensure job opportunities for Koreans.