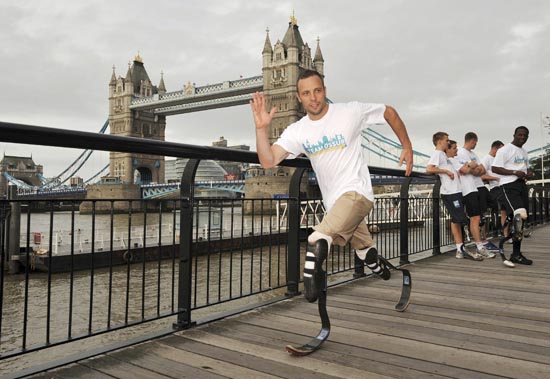 Oscar Pistorius poses for a photo near Tower Bridge in London on Wednesday. [REUTERS/YONHAP]


LONDON - Despite his trailblazing success at the World Athletics Championships, Oscar Pistorius knows he still hasn’t convinced everyone he belongs on the track next to able-bodied runners.

The double-amputee sprinter, though, insists he will not be distracted during his mission to qualify for next year’s Olympics in London.

“I feel very at ease with myself,’’ the South African nicknamed “Blade Runner’’ said Wednesday. “For every 5 percent of people that criticize me, 95 percent of people support me. ... I’ll always have my critics. I’ve done everything in my power to prove I don’t have any advantage.’’

And with 10 months to qualify for the 400-meters at the London Games, Pistorius does not want to exhaust his energy continuously defending himself.

“My job is not to get into a debate about this every day,’’ Pistorius said during a visit to London. “My job is to train. I’m an athlete, a sprinter, I have got to make sacrifices.’’

The 24-year-old Pistorius fought a lengthy battle with the IAAF for the right to compete in able-bodied events despite running on carbon fiber blades that some argue give him an unfair advantage. His ban was overturned in time to run at the Beijing Olympics, but Pistorius failed to qualify and had to settle for three gold medals at the Paralympics that year - in the 100, 200 and 400.

He finally made history by competing in the recently concluded World Championships in Daegu and returned with a silver medal - although he didn’t earn it in the way he had hoped.

Having helped South Africa get through the preliminary rounds in the 4x400-meter relay last week, he wasn’t selected to run in the final, where his country finished second behind the United States.

And he’s still fighting to convince the IAAF he can safely run any leg of a relay.

The sport’s governing body fears that running anything other than the leadoff leg - when every runner is still confined to his own lane - could endanger other athletes. There are concerns his blades could be a danger if he had to run in a bunch after the first leg.

“I have run all legs of various relays without any incidents,’’ Pistorius said. “If we have a training session we have to run in the same lane and I have never ever had an incident.

“We complied with their request although in the future I think we are going to have to demonstrate that I have run many relays in the past [without incident]. If I need to run any other leg to make us the strongest team possible then there is no reason why I shouldn’t do that.’’

But to have any chance of running the relay at the London Olympics, he first has to qualify for the South African team.

That requires a tricky balancing act to make sure he can run a fast enough time early in the year and still be able to peak in time for the Olympics.

“That’s really difficult to do as an athlete,’’ he said.

“We usually peak for two or three months a year. You don’t want to cut it too fine in June either.’’