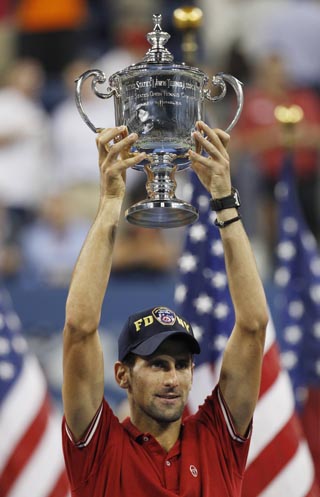 Novak Djokovic of Serbia poses after winning the men’s championship match against Rafael Nadal at the U.S. Open in New York on Monday. [AP/YONHAP]

NEW YORK - A year ago, Novak Djokovic was on the wrong side of the net and the celebrations after the last ball was struck in the U.S. Open final.

Somewhere in the back of his mind, though, as he watched Rafael Nadal fall to the blue court and bask in the lights of the world’s biggest tennis stadium, Djokovic had a sense that soon enough, that would be him.

On Monday it was.

After defeating Nadal 6-2, 6-4, 6-7 (3), 6-1 over 4 hours and 10 minutes of relentless, draining tennis, Djokovic dropped to his knees and kissed the same concrete that Nadal ruled last year, celebrating a win that capped one of the greatest seasons in the sport’s history.

“I guess it just clicked in my head,’’ Djokovic said, referring to his sudden awareness that he could beat Nadal and Roger Federer - the hegemons of the tennis world before 2011.

“I was always trying to wait for their mistakes and not having that positive attitude and believing I could win,’’ Djokovic said. “This has changed and the 2010 U.S. Open was one of the turning points in my career, definitely.’’

Djokovic won his third Grand Slam title of 2011 to match what Nadal accomplished last year and what Federer did in 2004, 2006 and 2007. Djokovic bested them both en route to this title, taking down Nadal two days after he overcame two match points against Federer to win the semifinal.

However it ends up, victory No. 64 may go down as the most impressive of them all.

Over the first two sets, second-seeded Nadal broke top-seeded Djokovic’s serve three times, and each time, Djokovic responded by doing what a champion does - answering back right away, then not looking back.

But it was the third set that was the classic, 84 minutes of side-to-side, unforgiving play from both men, filled with punishing groundstrokes that somehow kept coming back.

Nadal won that set, Djokovic walked off the court holding his back and the momentum shifted.

What that did, though, was allow the world’s top-ranked player to show he is made of sterner stuff nowadays. Yes, he improved his fitness and, yes, he changed his diet. But mostly, he changed his attitude.

With his back and ribs aching and his legs starting to cramp, he said he knew he couldn’t allow the fourth set to turn into yet another long series of rallies. He had to do what he’d been doing all year - go for it.

“I knew I wasn’t physically there,’’ Djokovic said. “I wasn’t as fit as I was at the start of the match. I needed to take the chances I did. It was an incredible set for me.’’

Every bit as telling, and stunning, as any of the 17 winners Djokovic hit in that fourth set (against only four unforced errors), was the way Nadal reacted as the set wore on.

Instead of rushing, skidding, shuffling, reaching out to get one more ball back as is his norm, he stood and watched.

Nadal watched at 30-all in the final game when Djokovic followed his serve with a backhand winner down the line.

He watched again on match point when Djokovic hit a forehand down the line, then dropped his racket and fell to the ground to celebrate in almost the exact spot where Nadal did last year.

A bit later, Djokovic pulled off his shirt and threw it into the stands, then put on a hat with FDNY (Fire Department of New York) written on it, a nod to Sunday’s 10th anniversary of the Sept. 11, 2001, terrorist attacks.

“I’ve had an amazing year and it keeps going,’’ Djokovic said.

A year ago, Nadal was being celebrated as the next King of Tennis, with nine Grand Slams (Now 10, counting this year’s French Open) and seemingly in need of nothing more than time and tournaments to match Federer, who holds the record with 16. A year later, however, Nadal is on a six-match losing streak to Djokovic - all of them in finals, including this one and at Wimbledon earlier this summer.

Unfortunately, the same cannot be said of Nadal. AP