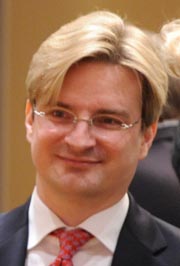 David Linton, an American expat whose family has been connected to Korea for over a century, has been granted honorary citizenship by the Seoul city government.

Linton, 40, came to Seoul in 1992, when he studied philosophy and the Korean language at Seoul National University. Since 2007, he has worked for Korean law firm Yulchon, specializing in international law and attracting foreign investment to Seoul.

The city government will grant honorary citizenship to a total of 16 expats on Oct. 28, in appreciation of their efforts to boost the image of the capital in various sectors. Since 1958, 666 people have received the honor.

“To be an honorary citizen of Seoul is to share in Seoul’s growing global profile and leadership,” he said in an e-mail interview. “Because I have legal and business experience in Korea and the United States and between the two countries, I would like to draw on that experience to contribute to Seoul’s further growth and development.”

Linton’s family has a long history with Seoul. His great-great-grandfather, Eugene Bell Linton, arrived here in 1895 as missionary and his son, William Alderman Linton, arrived in Korea in 1912 also as a missionary, living in the Jeolla and Chungcheong regions for 48 years teaching English and religion. During the colonial period, William Linton supported independence activists fighting Japan. He founded Daejeon University in 1956 and remained here until his death in 1960.

David Linton’s uncle, John A. Linton, whose Korean name is In Yo-han, has directed the Severance Hospital International Health Care Center since 1991. In his autobiography he describes his love for Korea, saying, “My home is South Jeolla and my soul is Korean.”

Another uncle, Stephen W. Linton, is chairman of the Eugene Bell Foundation, which provides antituberculosis drugs to North Korean children.

“My first connection to Korea was through my family members, but, I developed a strong personal connection during college, when I made an individual choice to come to Seoul to learn Korean after making many Korean friends at Columbia,” Linton said.

“Every city has its own unique advantages and disadvantages, and Seoul is no exception,” he added. “But the fact that I have chosen to remain here means that in my experience the good aspects of Seoul significantly outweigh the not so good aspects.”