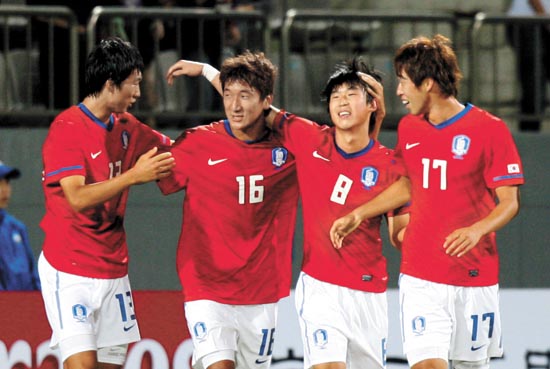 Korea’s Yoon Bitgaram, second from right, celebrates his goal against Oman during their Asian Olympic qualifier on Wednesday. [YONHAP]


Korea got off to a blistering start this week in the final round of Asian qualifiers for the 2012 London Olympics, but tougher challenges lie in store due to club commitments.

Yoon Bitgaram and Kim Bo-kyung both netted to put Korea at the top of Group A with three points after Saudi Arabia and Qatar, the other two teams in the group, fought out a 1-1 draw.

But a depleted under-23 team is expected to take to the field when Korea faces Qatar away on Nov. 23 and hosts Saudi Arabia on Nov. 27 as at least six players from Japan may be absent.

“November is the time when J-League clubs make a last-ditch effort to climb up in the standings,” said coach Hong Myung-bo. “I’m not sure if they will be willing to release our players. We need to talk to the clubs.”

Unlike for the World Cup, clubs are not obligated to send players home for Olympic qualifiers.

Even if they play, the likelihood of them being at 100 percent is slim given their tight schedules.

However this was not a concern on Wednesday as Korea romped to victory at Changwon Football Center in South Gyeongsang.

Gyeongnam playmaker Yoon proved pivotal to the team’s victory by providing a goal and an assist. The 21-year-old put the team ahead in the 23rd minute by curling his free kick left of keeper Mahnad Obaid Al Zaabi, before feeding the ball though to Kim in the 74th minute to double the lead.

“I’m glad we got the three points,” Hong said at the post game press conference. “There were some dangerous moments but overall the players gave it their all until the final whistle.”

After a brief respite Hong will knuckle down to problem-solving as he hopes to trample over the Middle East in November, despite the absence of European exports such as Ji Dong-won, Koo Ja-cheol, Nam Tae-hee and Son Heung-min.

To make matters worse, key senior team players could be missing as Korea plays the United Arab Emirates on Nov. 11 and Lebanon on Nov. 14 for the third round of Asian qualifiers for the 2014 World Cup.

Team captain and center back Hong Jeong-ho, left back Hong Chul and midfielder Yoon are all on the wanted list of national coach Cho Kwang-rae. If he decides to call them up, fatigue or injury may remove them from Hong’s selection list.

“I have to prepare thoroughly for the next two games because I don’t know who will be called up,” Hong said.

Korea is seeking its seventh straight Olympic appearance and ninth overall. The team has only advanced from the first round twice in eight attempts.