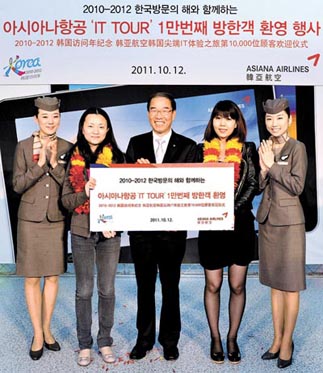 Asiana Airlines welcomed the 10,000th visitor to its IT tour program yesterday, which includes visits to Samsung Electronics’ showroom in Seocho-dong, southern Seoul, and a huge electronics market in Yongsan in central Seoul.

The program has proved a magnet for Chinese tourists since it was launched three months ago.

The country’s second-biggest airline rewarded the milestone-setting customer, China’s Li Jing, with a round-trip ticket and an electronics product.

“I’ve always been interested in Korea’s advanced IT products, so I joined the tour,” Li said.

“I’m also looking forward to experiencing Korea’s traditional culture in Insa-dong and traipsing around the shopping streets in central Seoul,” she added.

Ryu Kwang-hee, executive vice president of Asiana Airlines, said the tour was designed to give the country’s branding overseas a boost.

“We plan to promote the program in other parts of Asia as well as in China,” he said.

Asiana has recently focused on attracting Chinese tourists. Roughly 12,000 employees of China’s Baojian Group flew to the country last month, half on Asiana