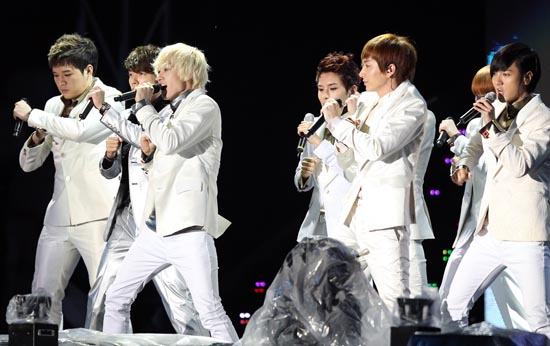 The 2011 Asia Song Festival closed with a splash on Saturday in Daegu, with more than 30,000 fans enjoying performances by popular Asian singers.

The festival, now in its eighth year, featured 13 groups from across Asia - Korea, Japan, China, Hong Kong, Taiwan and Thailand - and was held at Daegu Stadium, the site of this summer’s IAAF World Championships in Athletics.

Korea was represented by Girls’ Generation - which is set to release its third studio album, “The Boys,” on Wednesday - Super Junior, Miss A, U-KISS, G.NA, Beast and Lee Seung-ki.

The event was organized and co-sponsored by Daegu Metropolitan City, Unicef and the Korea Foundation for International Culture Exchange (Kofice).

This year’s festival has charitable aims. Proceeds from the festival’s theme song, “Dreams Come True,” which was released Oct. 11 as a digital single, will be donated to Unicef in order to help children in African countries. The song was sung by Super Junior member Donghae and Girls’ Generation member Seohyeon.

“The Asia Song Festival will develop into the one and only international charity music event in Asia that delivers the melody of hope among top stars from various Asian countries,” Kofice said in a statement.

The organizers said that all of this year’s participating artists will receive a plaque of appreciation from the Ministry of Culture, Sports and Tourism and a Best Asian Artist Award from Kofice for their support of Asian pop culture.