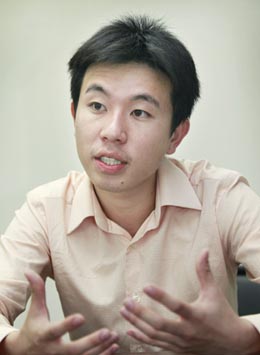 Seven young North Korean professionals were brought to Singapore in late August for a 10-day seminar, a rare opportunity for North Koreans to learn capitalistic business practices in the unique Singaporean political system.

“There is quite a big North Korean interest in economic development in Singapore,” said 26-year-old Geoffrey See, founder and managing director of the Choson Exchange, the Singapore-based nonprofit organization that facilitated this session. Singapore is a thriving financial center and a parliamentary republic that has been ruled by the same political party since 1959.

See, a Singaporean global management consultant, first visited Pyongyang in 2005 and was inspired by a young woman from Kim Il Sung University in North Korean. “She told me she wanted to show that women can become great business leaders as well,” said See, a graduate of the University of Pennsylvania’s Wharton School. He also has a master’s degree in East Asian studies from Yale University.

See founded Choson Exchange in 2007 to support long-term economic development in North Korea by running programs with young North Koreans and North Korean institutions to exchange economic, business and legal knowledge. Funding comes from sponsors, donations and out of the group’s own pockets. Headquarters is in Singapore, but See and his team travel to North and South Korea as well.

Choson Exchange has conducted small workshops in Pyongyang, where small groups of professionals under the age of 40 are teamed with foreign lecturers to discuss topics ranging from microfinance to asset management.

Based on the success of these meetings, North Korean partners expressed interest in learning more about Singapore’s economic policies, See said.

“We wanted younger policy makers,” See said in an interview, and people “who showed initiative.” North Korea recommended candidates for the Singapore study session, and Choson Exchange and the Swiss Cooperation Office, the Swiss representative office in Pyongyang and the sponsor of the project, interviewed most of the candidates. All the candidates were graduates of Kim Il Sung University, Pyongyang University or Kim Chaek University, and they work in investment or economic planning divisions.

The focus during their ten days in Singapore was discussion of various economic policies about which the North Koreans professionals could ask questions and raise their own ideas. It was a rare international networking opportunity for the chosen seven.

See describes the North Korean policy makers as a curious group ready to suggest ideas and eager to ask questions to test their own understanding of abstract concepts.

The Singaporean hosts were surprised at their English fluency and found them quite different from what they would have expected from media coverage of North Korea.

Sometimes, the North Koreans brought up abstruse terms they had read in the Financial Times, even though they had little relevance to the discussions, See said, “almost as if to simply prove they know such terms.”

The North Koreans expressed interest in how economic agencies in Singapore communicate and coordinate between policy-making institutes, especially because, in North Korea, there is little such communication.

Guest speakers included the former chairman of Singapore Airlines, a former finance minister, the chief economist for Bank of America Merrill Lynch in Southeast Asia and representatives of Goldman Sachs and Capital Group. “There have not been particular opportunities for Singapore to interact with North Korea,” See said.

Conversation topics included economics and government policy, the Mount Kumgang imbroglio and the Singaporean presidential elections, which were ongoing at the time. See said the North Koreans were “cautiously curious” about local politics.

“There’s a lot more individuality in the country than people expect,” See stated.