Luke Donald rallies from 5 down to win at Disney

Luke Donald rallies from 5 down to win at Disney 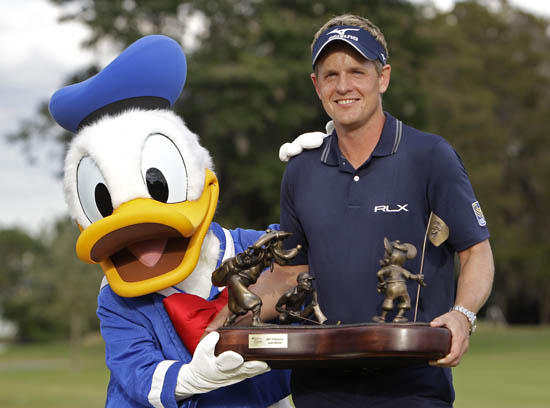 LAKE BUENA VISTA, Fla. - Already No. 1 in the world, Luke Donald left little doubt who was No. 1 on the PGA Tour on Sunday when he ran off six straight birdies on the back nine and closed with an 8-under 64 to win the Children’s Miracle Network Classic.

Donald felt his only chance to capture the PGA Tour money title - and state a clear case as player of the year - was to win at Disney in the final tournament of the year.

That’s what made his victory Sunday in the Children’s Miracle Network Classic his most gratifying win of the year. Five shots behind going into the final round, and still four shots out of the lead with nine holes to play, Donald left little doubt who was No. 1 - in the world rankings, and now on the PGA Tour.

Donald ran off six straight birdies to blow past Webb Simpson on the leader board and on the money list, closing with an 8-under 64 for a two-shot victory over Justin Leonard that makes him a clear favorite for PGA Tour player of the year.

“I told you guys on Wednesday that the goal was to win. Nothing was really going to be good enough other than that,’’ Donald said. “I think this is probably one of the most satisfying wins of my career just because of that.

Not only was Donald four shots out of the lead at the turn, he was two shots behind Simpson, who had a $363,029 lead on the money list. His caddie for the week, Gareth Lord, had sent Donald a text Saturday night to say that “it’s not over yet.’’

“We gave ourselves a chance,’’ said Simpson, who shot 69 and tied for sixth. “The fact is, playing against the best player in the world, he’s going to do something great like that most of the time, and he did. Made six birdies in a row. Tough to compete against.’’

Donald won for the second time this year on tour, as many as anyone else. He also won the Vardon Trophy for the lowest adjusted scoring average. He finished in the top 10 in 74 percent of his starts.

And now, he has his first PGA Tour money title with $6.68 million - along with a seven-figure bonus from sponsor Ralph Lauren.

The PGA Tour player of the year award is a vote by the players and ballots go out next week. Simpson had been considered a front-runner going into the week, mainly because he was leading the money list.