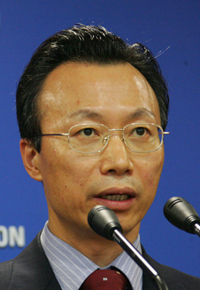 “Kim’s experiences and expertise as well as excellent performance were taken into account,” the Blue House said in a press release. Minister of Unification Yu Woo-ik recommended Kim, it said.

Known as “Mr. K,” the 55-year-old civil servant has long been involved in inter-Korean dialogues. During the historic inter-Korean summit in 2000 between then-President Kim Dae-jung and North Korean leader Kim Jong-il, he attended the meeting to record the dialogue. He also worked on the draft of the June 15, 2000 North-South Joint Declaration.

He was in charge of various inter-Korean cooperation projects at the Unification Ministry under the Roh Moo-hyun administration.

At the time, Pyongyang said three top South Korean officials, including Kim, met secretly with North Korean representatives in Beijing in May. The North said the South Koreans “begged” for inter-Korean summits to be held in June and August of this year and in March 2012. They also said the Seoul officials offered an envelope of cash.

Kim Tae-hyo, deputy national security adviser to President Lee, and Hong Chang-hwa, a director of the National Intelligence Service, were the other two South Korean officials who participated in the secret meetings with the North.

The two Koreas also met in Kaesong in November 2009 to talk about a possible inter-Korean summit, and Kim was known to have attended those meetings as well, sources have said.

The decision to promote a seasoned North Korea negotiator to the vice minister of unification post was announced amid diplomatic efforts to resume the stalled six-party denuclearization talks.

North Korea and the United States on Monday started bilateral talks in Geneva, following a similar meeting in New York in July. Seoul and Washington have also replaced their chief negotiators for the six-party talks earlier this month, fueling expectations of a resumption of denuclearization negotiations.