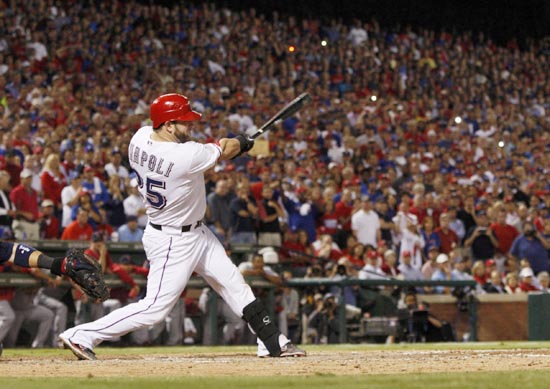 Texas Rangers’ Mike Napoli hits a two-RBI double against the St. Louis Cardinals in the eighth inning of Game 5 of the World Series in Arlington, Texas, Monday. The Rangers won 4-2 and lead the series 3-2. [REUTERS/YONHAP]


ARLINGTON, Texas - Texas Rangers’ Mike Napoli hit a tiebreaking two-run double in the eighth inning as the Rangers came from two runs down to beat the St. Louis Cardinals 4-2 on Monday and take a 3-2 lead in the World Series.

Solo home runs by Mitch Moreland in the third and Adrian Beltre in the sixth brought Texas level. Michael Young doubled leading off the eighth and Napoli hit a drive to right center of Marc Rzepczynski to bring in two runs.

“Just trying to get something to the outfield, get a sac fly, get that run across the board,’’ Napoli said. “I was trying to stay short and I got a pitch I could handle over the middle of the plate and put it in the gap.’’

Texas closer Neftali Feliz closed it out in the ninth, including striking out Albert Pujols as part of a double play when Allen Craig was caught by Napoli’s throw trying to steal second.

The win moved Texas within one win of its first World Series title. The series moves back to St. Louis for Game 6 on Wednesday, when Colby Lewis will be the Rangers starting pitcher, against Jaime Garcia for the Cardinals. The forecast is cold and wet.

If the Cardinals lose, there’s no doubt which play will trouble veteran manager Tony La Russa for a long time.

It was 2-2 when Texas put runners on first and second with one out in the eighth, and Rzepczynski was summoned from the bullpen. Texas batter David Murphy followed with a bouncer back to the mound, a possible inning-ending double play in the making.

Rzepczynski snatched at it but couldn’t glove it, succeeding only in redirecting it away from his second baseman, and the play resulted in no outs and loaded bases.

La Russa elected to let Rzepczynski stay in to face Napoli, and it didn’t work.

La Russa appeared stunned by the turnaround. Later in the eighth, he brought in reliever Lance Lynn and had him issue an intentional walk to the only batter he faced. Jason Motte eventually ended the inning, but it was too late.