Calligrapher finally gets exhibition of his own

Calligrapher finally gets exhibition of his own 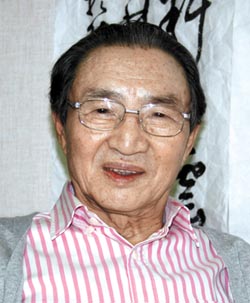 After many years of curating and participating in calligraphy exhibitions in and outside the country, Yi Gon, honorary president of the Korean Society of Calligraphic Arts, has finally opened the first exhibition focusing on his work.

The exhibition, “Writings Brought up from the Field in My Mind and Heart,” which also features the calligraphy of Oh Heon, opened yesterday and will continue through Nov. 3 at the Seoul Calligraphy Art Museum at the Seoul Arts Center (www.sac.or.kr) in Seocho-dong, southern Seoul.

Yi, 81, started a new life at a late age with calligraphy.

Born as a son of independence activist in Hannam Wonsan in North Korea during the Japanese colonial period, he later became a lieutenant major in the Korean Army after graduating from the Korea Air Force Academy.

Although he had studied calligraphy during his years at Choongang High School, he didn’t become serious about it until he started working at a loading company in Incheon in his late 30s.

When he retired at the age of 66, he founded the Korean Society of Calligraphic Arts, which supports calligraphic research and dissemination. Through the society, he has curated calligraphy exhibitions and created ties with the University of Hawaii and Lomonosov Moscow State University.

In his earlier years, he was diagnosed with gastric and prostate cancer but says the cancer is now gone.

“I’ll be fine until 100,” he said. “My plan is to bring calligraphy into people’s daily lives, because I think it can help improve their state of mind. As people these days try to finish tasks at a fast rate, they have lost their morality. I also hope to join calligraphy with the experimental arts.”

Yi also said he hopes to disseminate information about Korean calligraphy to foreigners. At every exhibit, Yi also offers calligraphy classes for foreign students. In Korea, he’s offered these classes since 2008 and around 70 students have gone through the course thus far.

“The Japanese people were exhibiting their calligraphic arts in various countries while Korea was busy rebuilding after the Korean War in the late 50s to early 60s,” Yi said. “When I meet foreigners interested in calligraphy, they say that it was born in China and that Japan developed it. Many of them don’t know that Korea also had calligraphic arts. For this reason, I’ve decided to take action to help spread Korean calligraphy to the world.”