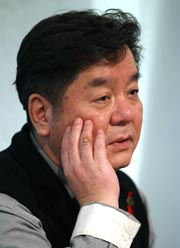 Film producer and director Shim Hyung-rae has been banned from leaving the country on suspicions that he embezzled 4.1 billion won ($3.7 million) of his company’s money and remodeled manufactured firearms.

The Seoul Metropolitan Police Agency said Shim, 54, the CEO of Younggu Art and director of “D-War” (2007) and “The Last Godfather” (2010), has also been under investigation since August for failing to pay about 800 million won in employee wages and other charges.

The police said it banned Shim, formerly a well-known comedian, from traveling because he is a flight risk due to the massive amount of debt he has accumulated.

According to police, Shim suddenly shut down Younggu Art on July 19 and told the Korean media that he couldn’t maintain the business because the company was 41 billion won in debt. 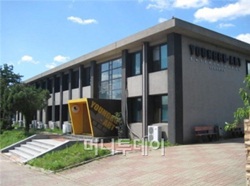 A few weeks later, 43 former employees of Younggu Art filed a petition with the Ministry of Employment and Labor on Aug. 1 for unpaid wages and severance payments worth 891.53 million won. The employees filed a lawsuit against Younggu Art on Oct. 1.

When the police summoned Shim and Younggu Art employees for questioning in August, the employees raised new allegations against him, claiming that he had embezzled about 4.1 billion won in company funds from 2008 to 2010 and used the money to gamble and to bribe high-ranking government officials in order to receive financial support for the company.

The employees said that Shim frequently visited a casino in Jeongseon, Gangwon, and would order employees to wire money to him when he ran out of cash.

The employees also claimed that Shim had manufactured 10 tear gas guns and refitted them as BB guns and said that he used the guns to fire BB gun pellets at employees on several occasions.

They said Shim told employees he would give them 100,000 won if they could avoid being hit.

Shim denies the allegation and insists the guns were props for a movie.

A former Younggu Art employee, who asked to remain anonymous, told the Korea JoongAng Daily that “He didn’t pay us, but used company funds for his private use and fooled around with loaded BB guns.

“He giggled when employees tried to avoid the bullets.”

Shim has admitted that the company has failed to pay employee wages but has denied the other allegations, including the incident with the BB gun and charges that he used company money to gamble.

Employees also said that Shim had tried to borrow about 10 billion won for movie production expenses and to pay off his debt. They also said that he has been keeping a secret notebook containing a list of about 400 Korean actresses and singers that he planned to use to attract investors.

Shim is also facing allegations that he received favors from government agencies. The allegations were raised during the Parliamentary inspection held in September.

Lee said that although it was the corporation’s policy at the time not to subsidize films with production budgets more than 8 billion won, as was the case with “The Last Godfather,” it adjusted the policy in order to accommodate Younggu Art’s request.

Lee said that the company’s application for funding included the false claim that actors Robert De Niro and Andy Garcia had signed on with the film. The police said that a total of 4.2 billion won was given to Shim, but it is now impossible to retrieve the investment as Younggu Art is now bankrupt.