A trio of exhibits puts young Chinese artists in the spotlight

A trio of exhibits puts young Chinese artists in the spotlight 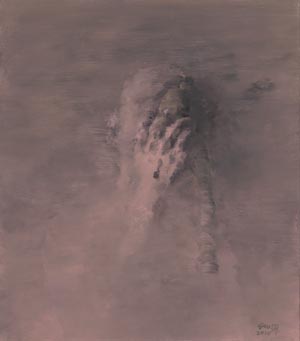 Although contemporary Chinese art suffered a massive blow in the aftermath of the 2008 financial crisis, it has since rebounded to become the second largest art market in the world. And its success has been secured in part by the trends set by the country’s newly rich collectors, the high quality of the works being produced and the potential for variety from its huge population, experts say.

In Korea, the growth of China’s art market has generated new interest among Korean collectors in Chinese art, and emerging artists in particular, sparked by the sky-high prices of works by famous artists such as Zhang Xiaogang, Yue Minjun and Zeng Fanzhi

Now, three exhibitions currently going on in Seoul and Gyeonggi will help local art lovers get a glimpse at the next generation of Chinese artists as well as works by lesser known Korean-Chinese artists.

“In the Heat of the Sun” at Gallery Hyundai on the art street east of Gyeongbok Palace in central Seoul features paintings, sculptures and animated films by eight Chinese artists, most of whom are in their 30s. 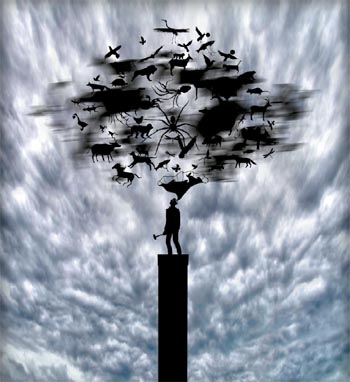 These artists are special “because they experienced both the Cultural Revolution and capitalism when they were young,” the gallery said in a press release.

The eight artists don’t directly address the sudden economic, political and social changes in China, but “traces” and “symptoms” of these changes remain in their works, indicating their attitudes toward the present and future, the gallery added.

Among the artists, Li Qing presents a pair of oil paintings that initially look the same but have different details. They are based on newspaper photos and depict summits held in China and other countries.

“I wanted to change the solemn photos of politicians, which are omnipresent in newspapers, into something funny,” the 30-year-old artist told reporters at the gallery last month.

His animated film “Cloud’s Nightmare,” with its dark, dreamlike atmosphere, is based on China’s shadow puppetry and art from Western fairy tales. The artist told reporters that his works reflect social conditions but are open to interpretation.

Also included in the exhibition are Chen Wei, whose photos of surrealist images contain everyday objects, and Zhu Yu, who looks through objects by painting them in a hyperrealistic manner. Also included is the group MadeIn, the duo Project without Space, painter Tu Hongtao and sculptor Yang Maoyuan.

Shen Fangzheng’s oil painting “Actually, Mount Fuji is a Volcano” is part of the “Strawberry’s Issue” show at Artside Gallery Seoul. Provided by the galleries

Shen’s creation process is somewhat unconventional and extremely laborious. He draws images based on his imagination and then finds objects or models that he wants to use to create the images. Then he takes photos of his creations and makes paintings based on what he has shot.

“From the beginning, he has a clear image of his final piece and prepares the models’ clothes, hair and accessories based on that image,” said Gustav D. Yim, the gallery’s curator. “While this is the process he goes through before he takes a picture, it is also the time when the design of the whole piece is created.”

“Both Korea and China have gone through a period of modernization and rapid social change in the last century,” Choi Anna, the museum’s guest curator, wrote in the exhibition catalogue. “Artists from both countries have created work in order to find their identities amid the violent upheaval in society. What the works share is that they are derived from human stories. Artists and museumgoers from both countries will be able to understand each other with these works.”

“Strawberry’s Issue” starts tomorrow and runs until Dec. 4 at Artside Gallery Seoul. Admission is free. Hours are from 10 a.m. to 6 p.m. Mondays to Saturdays.