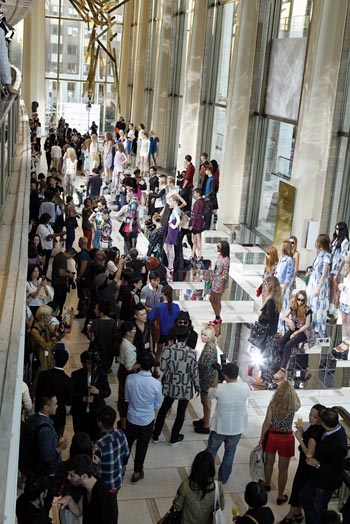 Jehee Sheen, the menswear designer behind his eponymous brand, has been showcasing his collection at two of the most prestigious fashion fairs in Europe - Pitti Immagine Uomo in Italy and Tranoi Homme in France - since 2009.

As the first individual Korean fashion designer to make his debut at both trade shows, Sheen initially had a difficult time gaining recognition not only for his brand but also for Korean fashion design as a whole. But the now-emerging designer, whose professional career spans less than five years, believes that consistent exposure of his creative works is more important to his success in the international market than short-term sales.

“It is true that competition is fierce in Europe, but I’ve been steadily making a profit there,” Sheen said. “But in the long term, and for symbolic significance, focusing on the European market - especially Paris - is important. I know some big-name buyers have been watching me and in one or two seasons, I expect some of them will contract with me.”

On Sept. 28, he gained an additional boost when he was chosen as one of 10 Korean fashion designers to receive extensive support from the Seoul Metropolitan Government under the Seoul’s 10 Soul project.

As part of the project, Sheen, along with nine other design teams, were given the opportunity to showcase their 2012 spring/summer collections at “Seoul’s 10 Soul Night,” held at Le Musee des Arts Decoratifs, which is located in the Louvre.

The Seoul city government-hosted event, which took place on the sidelines of Tranoi Femme, was solely devoted to the 10 designers.

“That the Seoul government lent us a hand has definitely helped,” Sheen said. “Korean designers attracted attention as a group among buyers and the press since Tranoi put us in the spotlight after the Seoul city government provided its formal assistance. The state-provided service, ranging from interpretation to an independent showroom, made the whole procedure at the fair much easier.” 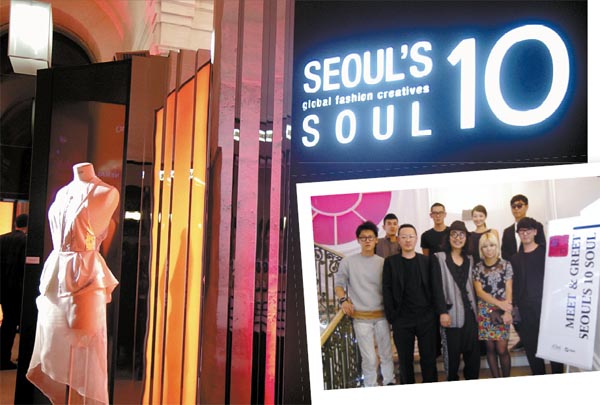 Nine of the designers selected to participate in this year’s Seoul’s 10 Soul Night pose at the event on Sept. 28 at Le Musee des Arts Decoratifs in Paris. Provided by the Seoul Metropolitan Government


Seoul’s 10 Soul is a project that the design-savvy Seoul government launched in April last year. Through the project, 10 designers are chosen to receive support each year, which helps them gain international credibility while also promoting the Korean fashion industry.

Sales by the Korean fashion industry at home and abroad are estimated at 39.5 trillion won ($35.5 billion) this year, marking a rise of 14 percent on-year, according to the Federation of Korean Industries. The business lobby cited exports of Korean fashion products as a major force in the increase.

In addition to “Seoul’s 10 Soul Night,” the three selected menswear designers participated in a showcase at Tranoi Homme in July, while the seven selected women designers showed collections at Tranoi Femme in October.

The Tranoi shows highlight some 900 fashion brands and attract the participation of an estimated 20,000 buyers.

The value of the export contracts that the first batch of Seoul’s 10 Soul designers gained through the Tranoi shows last year amounts to $1.63 million, with each piece by the respective designers valued at between $200 and $400, according to the Seoul government.

Ma Chae-sook, director of the Seoul Metropolitan Government’s Cultural Industry Department, said the city government chose Paris over New York, London or Italy as the first destination for the project because of its “symbolic significance” as still the most influential fashion capital of the world.

“We think Korea’s high-end designer brands can raise the overall image of Korean fashion products abroad,” Ma said. “Selling a massive amount of clothing at low prices in gigantic markets like China may give us instant figures. But the city’s focus on high-value items means that even products with low to moderate price tags can see their prices and images upgraded in the end. The ultimate impact on the overall industry will be huge.”


At the end of last year, the Seoul government picked designer Choi Ji-hyung of the womenswear label Johnny Hates Jazz as the “rookie” of the 10. She was guaranteed a high-end showroom in the trendiest district of Paris, top-tier public relations services and participation in the Paris Collection throughout 2011.

“It took 10 to 15 years for established Korean designers such as Lie Sang-bong in Paris to make proper forays overseas,” Ma said. “But with the government’s backing, Choi, a budding designer, easily became part of the official schedule at Fashion Week in Paris, and she did it in a short time. Isn’t it amazing?”

On Oct. 4, Choi had her runway show at Christie’s Paris during the Spring/Summer 2012 Paris Fashion Week period, rubbing shoulders with global fashion houses such as Chanel, Christian Dior, Lanvin and Hermes.

On the occasion of the show, she changed her brand name from Johnny Hates Jazz to Ji Choi. The decision was based on advice from global fashion consultants that Johnny Hates Jazz reminds most Westerners of the English rock band from the 1980s.

While Seoul’s 10 Soul is more focused on tangible business deals, Concept Korea was initially born out the belief that fashion “contributes to boosting the nation’s image,” said Lee Hyun-ju, director of the public art promotion team at the Korea Creative Content Agency, which is under the Culture Ministry.

For Concept Korea, the KCCA, which oversees the project, selects five to seven local designers to showcase their works on the sidelines of the biannual New York Fashion Week.

Although the project initially drew criticism for not providing designers with enough visibility because the clothes were displayed only on mannequins at a showroom away from the main Fashion Week venues, the selected designers are now given a runway show and a presentation at a venue that is close to the action, insiders say.

“The package offered by the Culture Ministry of a runway show and a showroom was extremely helpful,” said Son Jung-wan, who made her New York debut a season earlier without government support. “My fellow designers and I feel that Concept Korea has evolved in a more sensible direction than before, which has helped us develop real business contacts.”

It is not unusual for governments to become involved in spearheading the globalization of fashion. According to Lee of the KCCA, Japan started supporting its designers in the 1970s.

On the back of state-led support, three designer brands - Issey Miyake, Comme des Garcons and Yohji Yamamoto - formed the cornerstone of Japanese fashion beginning in the 1980s. The three are credited with creating the unique Japanese aesthetic and communicating it to the global market.

“In a broad sense, we, the Korea Creative Content Agency, and the Seoul Metropolitan Government are the driving forces behind Korean fashion’s globalization,” Lee said.

Even before the government began paying attention to fashion, however, there was a string of Korean designers who succeeded in the global market. But many of these now-elite designers have struggled in recent years with a decline in market share and profits amidst the entry of premium global fashion labels.

“It’s almost impossible for us Korean designers as individuals to beat the global giants,” said Son Jung-wan. Although she said domestic sales have continued to be resilient, she said she has been feeling a sense of crisis inching toward her because of the fear she will not be able to keep up with the competition.

Local designers say they cannot bring prices down any further because of mounting labor and textile costs.

“Unless they find alternative means to earn profits - success in overseas markets, which may be the most plausible yet challenging route - they can’t possibly survive anymore,” Lee said.

A handful of them - Solid Homme by Woo Young-mi, Lie Sang Bong by Lie Sang-bong and General Idea by Choi Bum-suk, to name a few - have succeeded, but the majority has yet to make a substantial mark overseas.

One example of the latter is Andy & Debb, a high-end fashion label run by a Korean couple who both graduated from the Pratt Institute of Fashion Design in New York. The brand, which features a minimalist structure and colors, became popular among Korea’s well-heeled fashion enthusiasts in the late 1990s and early 2000s.

As they saw their profits decline, the couple turned their attention to the U.S. market and rented an office and showroom in New York to promote their line. They held their own showcase in late 2008 and became part of Concept Korea a year later, but success is still elusive, according to Lee.

“For us Koreans, Andy & Debb is beautiful. But to New Yorkers, the line may not have an edge over Prada in terms of price and design, which is difficult to say but true,” Lee said.

“Still, we think it’s too early to say that they’ve either failed or succeeded because even the brand Hexa By Kuho, which has the backing of Cheil Industries, has yet to bear noticeable fruit in New York,” she said, referring to the company run by the second daughter of Samsung Group Chairman Lee Kun-hee. “But we believe that there should be constant exposure - at least three collections in a row, perhaps - before we come to a conclusion.”