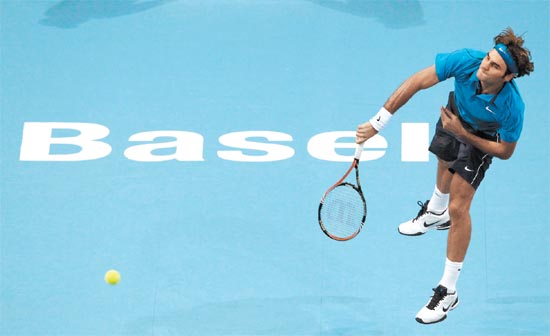 
BASEL, Switzerland - Roger Federer gave his hometown fans exactly what they were seeking as the four-time champion moved into the second round of the ATP Swiss Indoors on Monday with a 7-6 (7-3), 6-4 defeat of Potito Starace.

Federer, who is seeded three here behind 2009 winner Novak Djokovic and Andy Murray, showed some rustiness against the world number 54 before he claimed his sixth win in six meetings with the Italian.

The Swiss, who was recording his 50th win of the season at a tournament where he was once a teenage ball boy, last competed when he led his nation back to the Davis Cup World Group with a victory against Australia the weekend after the U.S. Open.

“Potito played well but I started to feel better in the second set with the first set in my pocket. He did make me work extremely hard,” Federer said. “I did well and I’m happy to be in the second round. I feel the court is a bit slower than last year.”

Federer, who withdrew from the October Asian ATP tournaments to rest his body and cure some niggling injuries, will face either Brazilian Thomas Bellucci or Finn Jarkko Nieminen.

Despite claiming just one title - his 67th, which came in the first week of the year in Doha, Qatar - Federer has reached the quarter-finals in 11 of the 13 tournaments he has played this year.

The Swiss needed a tiebreaker in the first set to get on top of Starace, but began the second with a break that he held throughout the set and took victory with his second match point.

“My goal is to win what I’m playing in the next few weeks,” said Federer. “My focus now is playing well at Basel. And the next round is my next priority.

“Last year I won here and in London and had match points in the Paris semis. I know I can play well at the end of the season. If I’m going to make a ranking move, that’s what it’s going to take.”

Meanwhile, 2005 finalist Marcos Baghdatis returned to Basel for the first time in three years to post an upset over Serbian eighth-seed Viktor Troicki 4-6, 7-6 (8-10), 6-2.

Baghdatis, who lost the 2005 final to Fernando Gonzalez, put out Troicki in two and three-quarter hours with six aces and five breaks of serve.

U.S. Open doubles champion Jurgen Melzer withdrew with back pain before his first round singles match, with the Austrian replaced by Russian lucky loser Mikhail Kukushkin.

Melzer, who lost in the quarter-finals of his home Austrian Open last week, was to have begun in Basel against American Donald Young.

The 30-year-old is said to be in danger of missing the ATP World Tour Finals in London starting in three weeks after he and partner Philipp Petzschner qualified by virtue of winning their second Grand Slam doubles title after Wimbledon in 2010.

Melzer will also not play next week at the Masters 1000, which wraps up the ATP regular season.