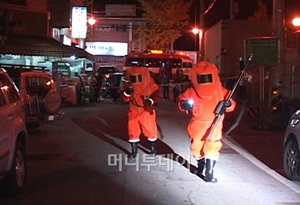 The Nowon District Office said it would repave two roads that were found to be the source of high radioactivity readings in the area.

On Tuesday evening, a resident of Weolgye-dong in Seoul’s Nowon District reported that her Geiger counter found high levels of radioactivity from a manhole near her apartment.

But KINS reassured area residents, explaining that the levels did not pose a threat to public health. Lying on the radioactive road for an hour a day for an entire year would still be less than 50 percent of the annual permissible dose of radiation, KINS said. It also added that the amount of detected cesium was minuscule.

The asphalt from the radioactive roads came from the Seoul Kyungin Asphalt Industry Cooperative in 2000 when Nowon District decided to repair the districts’ worn-out roads.

“As we carry out about 10,000 projects per year, it’s difficult to name which member business provided the asphalt at this point,” Seo Jeong-man, director of the Seoul Kyungin Asphalt Industry Cooperative, told the JoongAng Ilbo yesterday.

While the source of the radioactivity has yet to be confirmed, experts believe it is likely from the wastes that are added to asphalt.

“Asphalt is mainly made from oil residue provided by the country’s four major gas companies while aggregate is taken from nearby mountains or construction fields,” Seo explained.

Oh Jang-jin, researcher at the Nuclear Safety and Security Commission, said, “It is highly likely that the [radioactive substances] are from the wastes that sometimes get added while making asphalt.”

The district office also said that six more areas in the district used the same asphalt for roads in 2000 and that it had requested KINS on Thursday to conduct detailed inspections at the six areas. KINS said the results would be announced within a week.

“We’ll continue radioactivity readings on asphalt roads in the district to make sure all roads with high radioactivity levels get repaved,” said a district office official. “We will also request the Seoul Metropolitan Government to conduct complete examinations of asphalt roads as we presume the problematic asphalt was used in more roads across Seoul.”