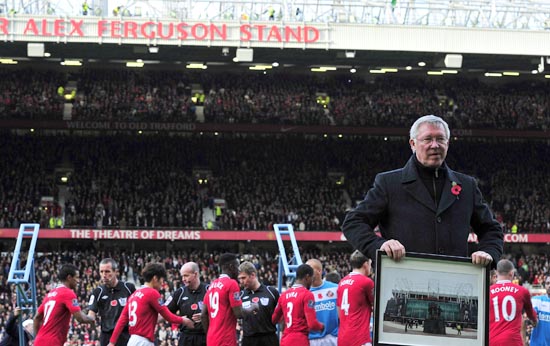 Manchester United manager Sir Alex Ferguson, right, is honored by having the North Stand named after him before the English Premier League match against Sunderland at Old Trafford in Manchester, England, on Saturday. [AFP/YONHAP]


MANCHESTER, England - Sir Alex Ferguson marked his 25th anniversary as Manchester United manager in subdued fashion as an own goal from former defender Wes Brown handed his team a 1-0 win over Sunderland.

The Old Trafford clash had been preceded by a brief, but poignant ceremony to mark Ferguson’s quarter-century in charge of the club, both sets of players forming a guard of honor to applaud the 69-year-old Scotsman onto the field.

United chief executive David Gill then announced that the club is to rename Old Trafford’s largest stand, the North Stand, as the Sir Alex Ferguson Stand, the first time an individual has been afforded such an honor at the stadium.

United has also commissioned a Ferguson statue, to be unveiled outside the stand, for the start of next season.

It was a gesture which clearly moved Ferguson, who said: “I’m happy to have had so many great matches here and so many of the greatest footballers this country has ever seen. I’d like to thank the fantastic supporters who have made this a very proud moment for me. Thank you so much.”

However, the ceremonies over, the football that followed will hardly be remembered among the more shining moments of Ferguson’s 25-year reign.

It took until first-half injury time for United to generate their first real opening, from which they took an undeserved lead into the dressing room.

Nani’s right-hand corner took the faintest of touches from the head of Danny Welbeck and a far more significant touch off ex-United defender Brown on its way into the Sunderland goal.

It was rough justice on the visitors who had manfully overcome an early setback when promising forward Connor Wickham was taken off on a stretcher after only two minutes following an accidental collision with United’s Nemanja Vidic.

Undaunted by the enforced change, Sunderland created the first chance when Sebastian Larsson shot into the side netting after 13 minutes with Nicklas Bendtner then forcing Anders Lindegaard into a full-stretch dive to keep out a 20-yard shot.

While United was limited to ineffective free-kicks and long-range shots, Sunderland looked the more dangerous side with Ji Dong-won, who came as Wickham’s replacement, wasting two promising openings, missing the target from the edge of the United area on both occasions.

In the 43rd minute, United finally showed some life as Ji’s compatriot Park Ji-sung’s attack ended with the ball falling to Phil Jones who volleyed over from 18 yards.

Soon after the restart, Nani’s 25-yard free-kick beat the Sunderland wall but passed just wide of the goal before Park’s cross was half cleared by Keiren Westwood’s punch only for Javier Hernandez to hurry his shot.

The home side survived an anxious moment in the 67th minute when it appeared that referee Lee Mason had awarded a penalty for an alleged handball from Jones although he eventually, and correctly, gave United a free-kick instead.

Sunderland then had their goalkeeper Westwood to thank for remaining in contention as he made an acrobatic double-save to keep out efforts from Wayne Rooney and Patrice Evra after persistent work in the area from Vidic.

But Ferguson’s defense has not been at its usual resilient best this season and, in the 80th minute, Larsson’s low center was almost converted by Bendtner as he slid into the six-yard area.

Hernandez might have eased some of the strain on Ferguson in the 86th minute, but his shot was woefully off target.