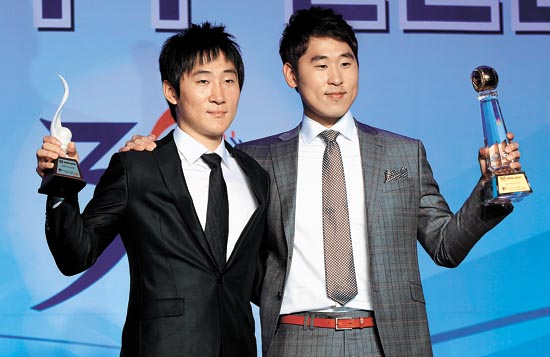 The 2011 KBO MVP winner Yoon Suk-min of the Gwangju Kia Tigers, right, and Rookie of the Year winner Bae Young-seob of the Daegu Samsung Lions pose during the award ceremony yesterday. [YONHAP]

Yoon received 62 of 91 votes from KBO-registered reporters, winning his first MVP award since making his professional debut in 2005.

“It’s an award that I can’t achieve only with my efforts,” said Yoon after receiving the trophy. “I’m very happy that all of my teammates helped me get this award.”

This year’s MVP ceremony received a lot of attention from fans as Oh, who finished the regular season at 1-0 with 47 saves and a 0.63 ERA, announced his intention to drop out of the MVP ballot in order to enhance the chances of his teammate Choi. The announcement was controversial, although MVP candidates are not able to officially withdraw. In the end, it turned out to be an easy win for Yoon.

The 25-year-old starter had a phenomenal season, leading the KBO in wins (17), ERA (2.45), strikeouts (178) and winning percentage (.773). The right-handed pitcher was the first to top four pitching categories since Sun Dong-yol, the Tigers’ new manager, did so in 1991.

“Sun Dong-yol has become the manager of our team and I believe he will make me stronger next year,” said Yoon, who became the fifth Tigers player to win the MVP in franchise history. “I will also perform better next season to meet the fans’ expectations.”

However, it is not clear whether Yoon will remain with the Tigers next season as he was reported to have signed with famed U.S. baseball agent Scott Boras, whose client list includes Alex Rodriguez, Matt Holliday and Korean player Choo Shin-soo of the Cleveland Indians.

It was also reported that Daejeon Hanwha Eagles’ left-hander Ryu Hyun-jin also signed with Boras. Yoon and Ryu are considered the best starting pitchers the KBO has seen in recent years and both played a pivotal role in Korea’s gold medal run in the 2008 Beijing Olympics and runner-up finish at the 2009 World Baseball Classic.

Yoon expressed yesterday that he wants to prepare early for a possible career in Major League Baseball by signing with Boras.

Under KBO rules, a player becomes eligible to play in overseas leagues after spending seven seasons in Korea but must have the consent of his club, while after nine seasons players become free agents. Yoon has just finished his seventh KBO season and Ryu is one season behind him.

This year’s Rookie of the Year award went to Lions outfielder Bae who received 65 of 91 votes from the reporters to edge LG Twins pitcher Im Chan-gyu. “I’m very happy to win the award,” Bae said. “I will perform better next year.”

Bae, who signed with the Lions in 2009, finished the season with 33 stolen bases, this season’s third-best total.