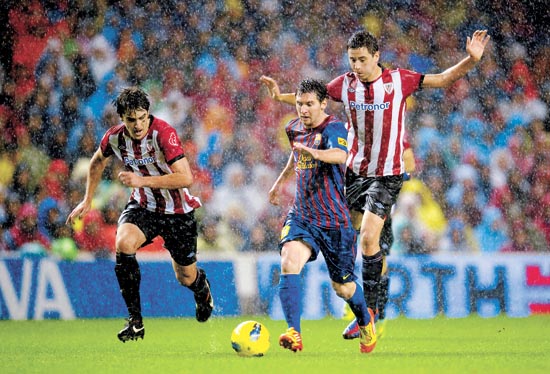 Midfielder Ander Herrera put Bilbao ahead in the 20th minute at San Mames Stadium before Cesc Fabregas drew the visitors even with a header four minutes later.

Bilbao appeared set to get the win after Gerard Pique scored an own goal in the 80th minute, but Messi slotted home his 14th goal in the added time to salvage a point for Barca.

“At the end we showed our mettle,’’ said Fabregas, whose Barcelona remained undefeated after 18 games in all competitions.

Under steady rain, Barcelona and Bilbao set a frenetic, up-and-down pace from the start.

Bilbao coach Marcelo Bielsa sought to beat Barcelona at its own game by pressing the European champions and looking for young playmakers Iker Muniain and Ander to create chances for Spain striker Fernando Llorente.

“We aimed to take the game to them,’’ Ander said.

Bilbao’s daring approach paid off when Ander received a pass from Markel Susaeta at the edge of the area and curled his right-footer into the right side of the net for the opener.

Bilbao goalkeeper Gorka Iraizoz did well to block Dani Alves’ strike from a set piece, but could do nothing when Fabregas rose above his marker to guide home Eric Abidal’s well-placed cross to momentarily silence the crowd.

Puddles of water appeared on the pitch after halftime, slowing down the ball but not the flow of the game.

Bilbao went ahead for the second time when Abidal’s clearance took a deflection off Llorente before Pique inadvertently redirected it into his own net.

But in the dying moments Messi pounced on his own rebound to fire the ball into the corner of the net to earn the draw.

Barcelona coach Pep Guardiola was full of praise for both teams.

“How they run, I’ve never seen a team run so much, how they plug the spaces,’’ Guardiola said about Bilbao, which is undefeated in 10 straight games overall. “What a spectacle these 22 players put on. This is one of the best games that I have been in and that’s because both teams went out to win.’’

Even so, this is the first time Barcelona has trailed Madrid by three points since Guardiola took over as coach of his former team three years ago.

Angel Di Maria set up Madrid’s 23rd-minute opener when he picked out Ronaldo at the near post with a cross for the Portugal forward to flick into the net.

“My goals are not important, what counts is that the team wins,’’ said Ronaldo, who has scored 13 goals in the league and 17 overall.

Ibrahima Balde pulled one back for Osasuna in the 30th, but any thoughts of an upset quickly evaporated as four minutes later Di Maria sent in another cross for Pepe to head home at the far post.

The 23-year-old Di Maria then completed his playmaking display with his league-leading 10th assist in the 40th minute when he slid the ball into the area for Gonzalo Higuain to curl into the right side of the net.

Di Maria was taken off on a stretcher for an apparent leg injury early in the second half, but Madrid continued to roll when Ronaldo fired in a penalty in the 54th after defender Eneko Sartustegi was sent off with his second booking for fouling Mesut Oezil in the area.

“The first half was tough for us playing against a well-organized team, but after they equalized we had a little luck to go back ahead,’’ Madrid coach Jose Mourinho said. “Then in the second half it is difficult for any team to play with 10 men.’’

Ronaldo headed in a cross from Alvaro Arbeloa in the 58th before Karim Benzema, who replaced Di Maria, scored from inside the area in the 63rd and 81st.

Turkey midfielder Nuri Sahin debuted for Madrid as a substitute after having recovered from a nagging leg injury sustained in the preseason.

Striker Helder Postiga equalized in stoppage time to secure a 2-2 draw for Zaragoza against Sporting Gijon.