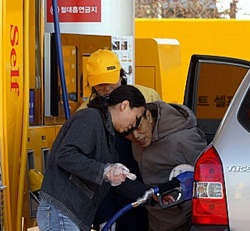 Today, the commute costs her 300,000 won a month in gas. In August, Choi began leaving her car at home and using public transportation.

“On my credit card bill, the only transactions on a weekday were generally at gas stations, and it occurred to me that I was spending my money on the road,” Choi said.

She now leaves home at 6:30 a.m., half an hour earlier than when she drove, to catch a bus to Suwon Station, where she takes the subway to Pyeongtaek Station. To get to her workplace from the subway station, Choi takes the company shuttle bus, which only comes once at 7:48 a.m.

Her monthly transportation expenses are now 90,000 won, less than a third of what they used to be.

“Even though it’s tiring, for the time being, I plan on continuing to use public transportation,” Choi said.

While some like Choi have begun leaving their cars in the garage, others have adopted novel cost-saving methods to pay less at the pump.

One smartphone app finds gas stations with the lowest gas prices, inundating self-service stations that keep their prices low by skipping the amenities and perks offered at most other gas stations.

At a self-service Hyundai Oilbank in Seoul’s Dongjak District on Sunday, a seemingly endless stream of cars waited their turn to fuel up. The usual freebies - tissue packs, bottled water, coupons - were not handed out here, but that didn’t seem to bother the drivers, who came flocking because of the price of gas: 1,964 won per liter ($6.66 per gallon), 200 won cheaper than other nearby stations.

“My smartphone app Opinet indicated that this place had the lowest gas price in the area, so I found my way here,” said Choi Ju-ri, 31, an office worker who was refueling her car.

The gas station manager, Go Suk-jong, said an average of 1,400 cars come by each day. “Since we opened in February of last year, we have seen an increasing number of customers seeking us out,” Go said.

Lines were also long last Tuesday at a GS Caltex station in Yeonhui-dong in Seoul’s Seodaemun District, where a liter of gas went for 1,936 won.

Likewise, Jung Eun-i, 47, a cosmetics saleswoman, said she went out of her way to patronize this station.

“My house is in Eungam-dong, but I always refuel at this gas station,” Jung said. Still, others are choosing to carpool to save money.

After posting a flyer near his home in Gimpo, Gyeonggi, asking if anyone would be interested in carpooling to Sinchon, western Seoul, in his Hyundai Avante, Ahn Seung-tae, 34, found someone who worked in the same area and was willing to pay him 4,000 won per day to cover gas and other car expenses.

“Previously, I used to carpool with a colleague from work. But because we had a close relationship, it was difficult to properly divide the costs,” Ahn said. “Gas prices are rising every other day, so for the first time, I have begun to carpool with a person I don’t know.”