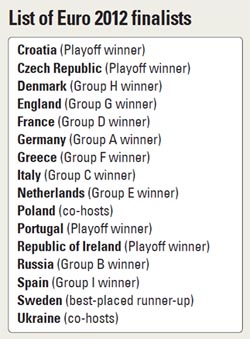 LONDON - Portugal, Croatia, Ireland and the Czech Republic clinched places at the European Championships on Tuesday to complete the lineup for next year’s tournament.

Cristiano Ronaldo scored twice to lead Portugal to a 6-2 win over 10-man Bosnia-Herzegovina in the second leg of the teams’ playoff, securing progress by the same aggregate score.

Croatia thwarted Turkey’s comeback hopes with a 0-0 draw in Zagreb that secured a 3-0 aggregate win, while the Czech Republic won 1-0 at Montenegro and 3-0 overall. Ireland completed a 5-1 win over Estonia with a 1-1 draw in Dublin.

Spain’s poor form in friendly matches continued with a 2-2 draw at Costa Rica, but Germany confirmed its status as arguably the strongest contender to unseat Spain as European champion by beating the Netherlands 3-0.

In other friendlies, England defeated Sweden 1-0 to end 2011 unbeaten, Denmark beat Finland 2-1, Italy lost 1-0 to visiting Uruguay and France was held 0-0 by Belgium.

Playing late in the day, Portugal clinched the last of 16 places for next year’s competition in Poland and Ukraine.

Ronaldo settled his team’s nerves with an eighth-minute free kick and Nani made it 2-0 to the 2004 European Championship runner-up with a long-range shot 16 minutes later.

Zvjezdan Misimovic got a goal back for Bosnia with a penalty awarded for a handball by Fabio Coentrao but Ronaldo restored his team’s two-goal advantage shortly after halftime, beating the offside trap and rounding the goalkeeper to tap the ball into the net.

Senad Lulic was sent off for dissent a minute later and Emir Spahic trimmed Bosnia’s deficit again from what may have been an offside position, but two goals from Helder Postiga and another from Miguel Veloso ended any doubts in the last 18 minutes.

Croatia qualified for the fourth time since becoming an independent nation in 1991 courtesy of a comfortable 3-0 lead from Friday’s first leg.

The 0-0 draw preserved Croatia’s perfect playoff record - it qualified against Ukraine for the 1998 World Cup and against Slovenia for Euro 2004 - and restored pride after it was eliminated from the Euro 2008 quarterfinals by Turkey, conceding in the last seconds of extra time before losing a shootout.

Ireland qualified for a major tournament for the first time in 10 years, adding to its 4-0 first-leg advantage in the 32nd minute Tuesday when Stephen Ward smashed in a rebound after Estonia goalkeeper Pavel Londak spilled Kevin Doyle’s initial header. Estonia salvaged some pride in the 57th as captain Konstantin Vassiljev’s shot slipped through Ireland goalkeeper Shay Given’s hands.

The Czech Republic qualified for its fifth straight European Championship when, against the run of play in Podgorica, Petr Jiracek surged past two defenders and scored with a low shot from 11 yards.