Jeonse in Seoul dips, but just a bit

Jeonse in Seoul dips, but just a bit 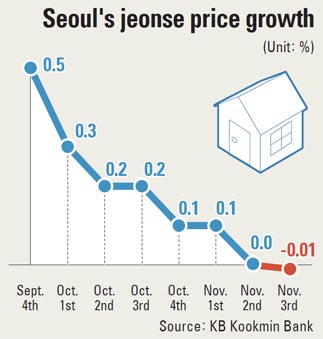 The price of jeonse - long-term deposits on leased apartments and houses - dipped in Seoul for the first time in nearly a year and a half.

But analysts and even the government said this wasn’t yet an indication of a rebound in the real estate market.

According to the Ministry of Land, Transport and Maritime Affairs, based on a Kookmin Bank real estate report, the jeonse price in Seoul this week was 0.01 percent lower than the previous week.

This was the first dip in jeonse prices since June 28, 2010. Jeonse prices have been rising because of a stuck-in-the-mud real estate market. Apartment and home buying is in the doldrums because buyers are still waiting for the market to bottom out. As a result, house and apartment owners have been forced to lease out their properties rather than sell. That has pushed up the price of jeonse deposits. 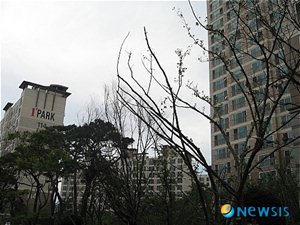 Under the jeonse system, lessees pay an initial sum instead of monthly rent and the deposit is returned to them when the leasing contract expires.

According to the report, 13 districts out of the 25 districts in Seoul saw jeonse prices fall. Neighborhoods south of the Han River contributed most to the fall, dipping 0.04 percent on average. The jeonse price in Gangdong District, southeastern Seoul, fell 0.16 percent from the previous week. Gangnam and Yangcheon Districts, where jeonse prices spiked earlier this year due to high demand, retreated 0.08 percent each.

North of the Han, jeonse grew 0.03 percent from the previous week. But that was a deceleration from the 0.06 percent of the week before. The jeonse in Gyeonggi fell for the third week in a row. Nationwide, jeonse prices were up 0.05 percent but that rate was half of the 0.1 percent growth posted the previous week.

However, analysts cautioned that the dips could be temporary as this time of year is a season of low demand for renters. “According to our own findings, jeonse prices in Seoul have been falling for the last three weeks and we expect a similar move this week,” said Lee Ho-yeon, an analyst at Budongsan 114, a real estate information agency.

“This is not because demand for jeonse is falling while demand for home buying has gone up,” Lee added.

The so-called jeonse crisis started building earlier this year due to a low supply of rental units, caused by redevelopment projects in Seoul that temporarily removed many apartment units from the market, along with landlords switching from jeonse-style renting to leasing out properties for monthly rents, due to the decline in interest rates on deposit.