Wenger says Arsenal is the ‘club of my life’

Wenger says Arsenal is the ‘club of my life’ 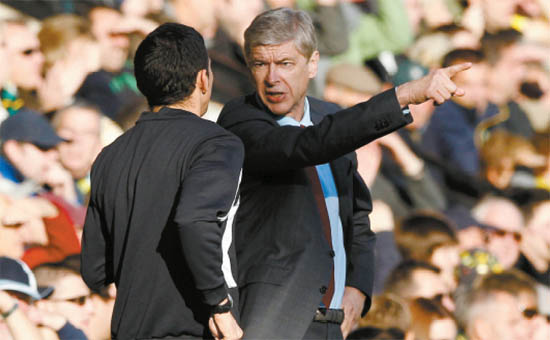 
NORWICH, England - Arsene Wenger insisted he remained fully committed to Arsenal but admitted he would consider resigning from the “club of my life” if he failed to match his own high level of expectation.

The Frenchman, who has been in charge of the club since September 1996, watched his side come back from a goal down to win 2-1 at Norwich on Saturday, a 10th win in 12 games that took Arsenal to sixth in the table.

Wenger had created a stir in an interview with French daily L’Equipe published on Saturday, which suggested he may consider his position at the end of the season.

The 62-year-old, who joined Arsenal in 1996, later clarified his comments to reporters.

“It was a conversation I had with the journalist, and he asked if there was any way I would leave this club,” Wenger said.

“I said the only way would be if at the end of the season I felt I hadn’t delivered what is expected from me. That is the only way I would consider it.

“For the rest, I am personally committed to the club and will respect my contract until the end,” added Wenger, whose current contract still has two years to run.

“This is the club of my life and it will remain that - unless I feel I have not done well enough.”

Many Arsenal fans would regard failure to qualify for next season’s Champions League an underachievement, as they have become used to appearing in that competition.

But Wenger, whose side was placed sixth in the Premier League table after the Norwich game, refused to use such specific criteria.

“It is not as simple as that. If you want me to say now that if we are not in the top four I will quit, I won’t say that,” Wenger said.

At Norwich, Wenger had captain Robin van Persie to thank once again for the goals which ensure Arsenal will maintain its feel-good factor heading into next week’s Champions League clash with Borussia Dortmund.

Steven Morison, the Welsh forward, capitalized on some sub-standard defending by Germany’s Per Mertesacker to give Norwich a 16th-minute lead against the run of play.

But van Persie scored for Arsenal twice, in the 26th and the 59th, to become only the fifth man to have scored 30 Premier League goals in a calendar year.

Van Persie has scored 31 times in 29 Premier League games in 2011, and Arsenal is trying to persuade him to sign a contract extension as many clubs, including Manchester City, are keen to lure him away.

“My dream is that van Persie stays until the end of his career, and I will do the maximum I can to try to convince him,” Wenger said.