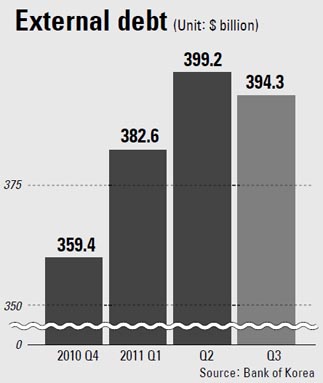 Korea’s liquidity risk saw its biggest drop since the Lehman Brothers bankruptcy sparked a global economic crisis. The decline in short-term debt came as the nation’s external debt was heading toward $400 billion for the first time this year.

According to the Bank of Korea, external debt was nearly $5 billion less than in the previous quarter at $394.3 billion.

This was the first time since the fourth quarter of 2010 that the country saw a drop in the external debt. In the past two quarters, external debt has been rising at an alarming rate, gaining $22.5 billion and $15.4 billion from the previous quarters, respectively.

The central bank cited the significant drop in short-term debt between July and September as a major contributor.

This is the sharpest quarter-to-quarter drop since the fourth quarter of 2008, when the nation’s short-term debt shrunk $47.7 billion.

Moreover, the ratio of a one-year maturity short-term debt divided by the nation’s foreign reserve was 45.7 percent. This is 4.9 percentage points lower than the previous quarter. A higher ratio indicates that a country is edging closer to a liquidity crisis.

The short-term debts also accounted for 35.1 percent of the outstanding external debt in the third quarter; down 3.4 percentage points.

“In 2008, short-term debt plunged because the market was suffering from a liquidity crunch affected by the Lehman Brothers crisis,” said Cho Yong-seung, a BOK official.

“During this year’s third quarter, short-term debt shrunk due to various factors, including foreign banks offloading to secure insolvency amid a growing debt crisis in the euro zone,” Cho added.

In the third quarter, long-term debts have grown from $245.4 billion to $255.8 billion as foreign banks increased their holdings on long-term debts while reducing short-term debts. Foreign investors also saw their investment in Korea shrink as the stock market struggled from a bearish rally impacted by the debacle in the euro zone.

Additionally, their stock holdings value was undercut by the depreciation of the Korean currency against the U.S. dollar. At the end of September, outstanding foreign investment in Korea was $822.5 billion. This is a drop from the $902.3 billion posted in the second quarter.

The Korean stock market, which was trading above the 2,000 mark until June and July, fell to 1,900 in August as news of a U.S. credit rating downgrade and the jitters in Europe affected the local markets. Since then, the Korean market has failed to reach the 2,000 mark again and has recently been hovering in the 1,800 level.

The won saw its value fall 8.6 percent to the greenback in the third quarter compared to the second quarter.