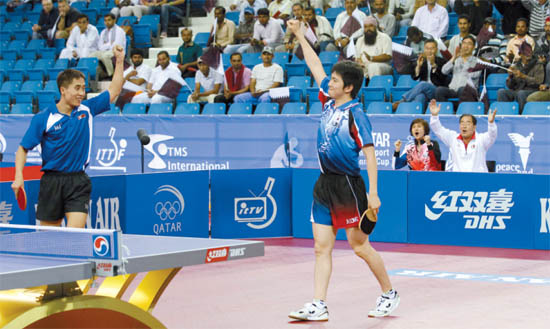 The inter-Korean duo downed the pairing of Fan Yiyong of the United States and Grigory Vlassov of Russia in the final, 11-9, 11-3, 11-4.

At the exhibition table tennis event, co-organized by the International Table Tennis Federation (ITTF) and the Peace and Sport Foundation, players from 10 nations that have been historically at odds with one another formed doubles teams for men and women. The U.S. and Russia, former cold war rivals, and India and Pakistan, were among the other doubles teams.

In the women’s competition, the Koreans took home silver. Anna Tikhomirova of Russia and Lily Zhang of the U.S. edged South Korean Kim Kyong-ah and North Korean Kim Hye-song in the final, 6-11, 11-8, 3-11, 11-3, 11-8. For both men and women, five teams entered the competition. Both Korean teams were ranked as top seeds and had byes to the semifinals.

In the semis, Ryu and Kim defeated Chen Qi of China and Ahmad Al-Mohannadi of Qatar in straight sets, 11-8, 11-4, 11-0. The Kim-Kim duo in the women’s bracket edged Carole Grundisch of France and Natsumi Miyake of Japan in the semis.

The Koreas remain technically at war because the 1950-53 Korean War ended in an armistice, rather than a peace treaty. Despite the display of sporting goodwill here this week, tensions remain on the peninsula. This Wednesday in South Korea marks the first anniversary of North Korea’s shelling of South Korea’s Yeonpyeong Island, its first attack on South Korean territory since the Korean War.

After the men’s doubles win, Ryu, the men’s singles champion at the 2004 Athens Olympics, was able to put aside political or military concerns for a moment.

“I am very happy to win this event, especially with my partner from North Korea,” Ryu was quoted as saying on the ITTF Web site. “I hope there will be more chances to play together and win.”

The ITTF and the Peace and Sport Foundation has said the tournament was designed to “encourage dialogue and good relations” among countries.

Organizers have promoted this event as “Ping-Pong Diplomacy 2.0.” The name harks back to a table tennis exchange between the U.S. and China three decades ago, which eventually led to U.S. President Richard Nixon’s trip to Beijing in 1972.