Next up: FTAs with China, Japan

Next up: FTAs with China, Japan 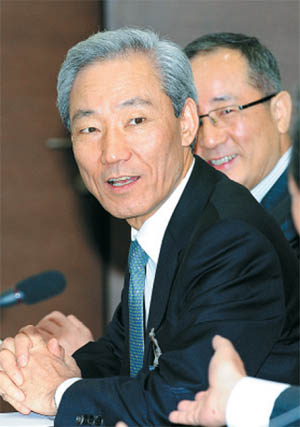 The ratification of the Korea-U.S. free trade agreement will help accelerate negotiations of other major trade pacts, such as deals with China and Japan, a high-level government official said yesterday.

“Now that the Korus FTA passed the National Assembly, it’s time for us to focus on holding more intensive negotiations with the remaining countries,” said Deputy Trade Minister Lee Si-hyung yesterday at a briefing at the Government Complex in Gwanghwamun, central Seoul.

“Much of the government’s workforce was dedicated to pushing the Korus FTA through, which made it difficult to work on trade deals with other countries,” Lee said.

He remained tight-lipped, however, on the prospects of FTAs with China and Japan, saying that “the ministry will not be in a hurry to conclude the deals” but would “hold closer and more intensive talks.

“The passage of the Korus FTA doesn’t mean that other FTA negotiations would automatically be concluded soon,” the official said. “But they could speed up.”

Korea’s Strategy and Finance Minister Bahk Jae-wan also told reporters that “the government will have to think twice and make decisions [on Korea’s FTA with China],” and for now “more discussions [among us] should take place.”

According to the Ministry of Foreign Affairs and Trade, Korea is in trade negotiations with 12 countries, including Australia, Colombia and Canada. It is also in the process of conducting research or holding working-level discussions with 17 other countries, which include Japan and China.

The ministry said, “Talks with Australia and Colombia are unlikely to be concluded any time soon because there are still differences on key issues.”

According to the Ministry of Strategy and Finance, the Korus FTA is expected to increase the country’s GDP by 5.7 percent in the decade after the pact goes into effect. Around 351,000 jobs will be created over 10 years and Korea’s trade surplus with the United States is expected to expand by $138 million.

The Korea Development Institute predicts that with the elimination of tariffs, “Korea’s economy could grow more than 4 percent next year” despite the debt crises stemming from the euro zone and other global economic woes. The KDI said that without the FTA, Korea’s economy would have grown 3.8 percent.

The agreement with the United States will enlarge Korea’s free trade economic territory to approximately 61 percent of the world’s gross domestic product. That’s far larger than the free trade territories available to Chinese or Japanese traders.

Prior to the U.S. deal, Korea’s free trade economic territory accounted for 36.5 percent of the world’s GDP based on the deals made with economies including the EU, Chile, Peru, India and Asean. 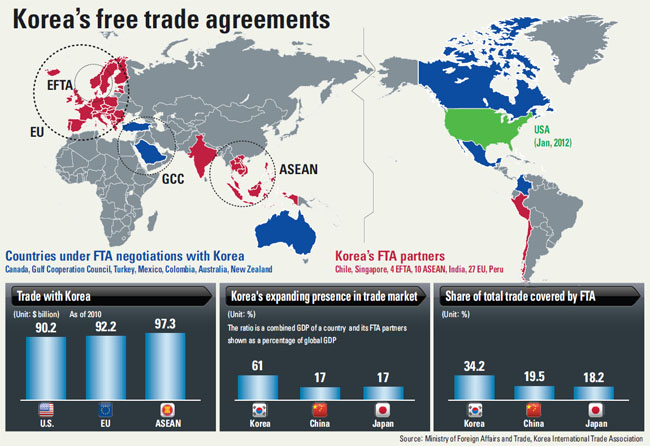 “Korea has a foothold in becoming a trade hub in Asia, beating out industrial nations like China and Japan,” said Kim Ik-joo, head of the international finance bureau at the Finance Ministry.

The United States accounts for 12.8 percent of global imports, equivalent to $1.97 trillion as of last year. Korea and the United States will eliminate 96.1 percent and 94.9 percent of their tariffs respectively in the five years after the pact goes into effect.

Since exports account for around 40 percent of Korea’s GDP, it is vital to increase trade volumes to maintain growth, thus the interest in similar deals with Japan and China.

FTA negotiations with Japan began in December 2003 and went on for six rounds over a year or so. The two countries made little headway until talks resumed in 2008.

With China, Korea began holding meetings on coordinated research in March 2007. The two countries haven’t embarked on an official round of FTA talks.

According to the Trade Ministry, Lee, its deputy minister, will visit Tokyo today for the 10th Korea-Japan high-ranking economic officials’ meeting, which analysts see as an opportunity to hold discussions on the current state of their economy as well as trade.

“We will report to each other policy trends related to the FTA and share information,” Lee said.

The Trade Ministry will have a meeting with China on quarantine issues next week, the ministry said.

“The purpose of holding a discussion on quarantine is to prevent worries from growing about sanitary problems that might occur when the two countries increase trading,” Lee said. “Korea wants to export vegetables like bell peppers, dishes like samgyetang [chicken-broiled soup], as well as cosmetics, but there are procedural hurdles in the process.”