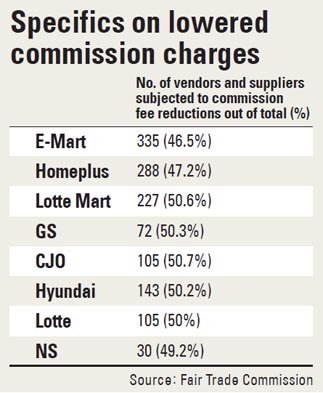 Two days after the industry watchdog unveiled the results of its month-long investigation into whether television shopping channels and discount stores charge smaller vendors and suppliers unfairly high commission fees, large retailers have agreed to lower their rates.

The five TV shopping channels of GS, CJO, Hyundai, Lotte and NS consented to bring down their rates for vendors by 3 percent to 7 percent, the Fair Trade Commission said yesterday.

And E-Mart, Homeplus and Lotte Mart, the country’s three largest discount stores, agreed to trim their sales-fee margins for 850 small- and mid-sized suppliers by 3 to 5 percentage points, it added.

Those suppliers and vendors that are affiliates of the large retailers, as well as foreign firms and import vendors, were excluded from the revised rates, which are being applied retroactively from October.

The FTC disclosed earlier this week that the two groups of businesses were charging excessively high commissions.

Small vendors that sell their products via the TV channels were found to have been paying an average of 37 percent of sales to the retailers. Suppliers of large discount stores were also being compelled to fork over 10 percent of their incomes on average as sales fees.

The FTC also found that the three aforementioned department stores charge small vendors commissions equivalent to a median 32 percent of their sales. The stores agreed earlier this month to trim the fees by 3 to 7 percentage points for 1,052 small and mid-sized suppliers.

In the meantime, the large retailers yesterday accepted the revised rates as part of efforts to support their smaller partners with a goal of ultimately creating greater synergy in line with a phrase bandied about earlier by the government and dubbed “ecosystemic development.”

However, they also expressed concern that they would soon face even more pressure from the watchdog.

“We decided to accept the FTC’s decision to help relieve the burden faced by small vendors,” said a representative from CJO Shopping. An E-Mart employee added that “yesterday’s announcement will be an opportunity to put more value on balanced growth.”