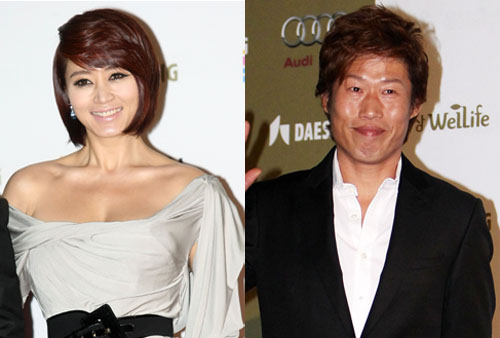 All eyes were on actress Kim Hye-su on Friday night at the Blue Dragon Awards, the annual Korean film awards, where Kim’s reunion with ex-boyfriend Yu Hae-jin did not go unnoticed.

Kim is usually the main attraction at such award shows due to her risque dress choices. However at this year’s awards, her dress wasn’t the only topic of gossip.

What made the night memorable for onlookers was Kim’s show of affection towards her ex-lover Yu. Kim, who co-hosted the award ceremony, wasn’t shy about supporting her ex on stage and applauded when Yu stepped up to present the award for best director.

Later on, the former lovers were captured on camera in a warm embrace after Kim stepped down from the stage. The amicable gesture between Kim and Yu, who dated for around three years, garnered much praise from viewers and netizens alike. Fans complimented the two actors for their professionalism and “cool” gestures despite the fact that it could have been awkward facing an ex.