All eyes on Samsung’s yearly shuffle

All eyes on Samsung’s yearly shuffle 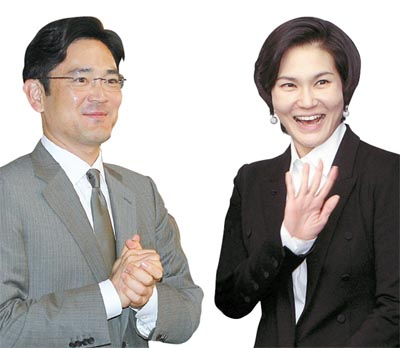 Samsung Group, Korea’s mega-conglomerate with more than 60 affiliates in electronics, engineering, finance, textile and hospitality, is expected to announce its annual executive reshuffle next week.

The company reshuffles its execs at the end of every year. Last year, the shuffle took place on Dec. 3.

Media speculation is mounting on what this year’s reshuffle will bring. The Korea JoongAng Daily compiled some of the rumors as a preview of possible upcoming changes at Korea’s biggest company.

Industry insiders say that the upcoming reshuffle won’t be major for two reasons.

First, Samsung Group conducted a bold, news-making reshuffle last year, promoting Chairman Lee Kun-hee’s three children to key posts within the empire. This was seen as part of a gradual power transfer to the third generation of the founding family.

Second, since Chairman Lee began coming to work regularly at Samsung’s Seocho headquarters since April - instead of working from his Hannam-dong residence as he did in the past - he has become more hands-on than ever and has already punished or promoted people without waiting for the year-end shuffle.

In June, Samsung replaced the heads of its internal inspection and human resources departments after discovering improper behavior at one of the group’s affiliates. It restructured its LCD division in July after losses and its medical center unit to beef up that business in October.

Another promotion for Jay Y.

Market watchers are keeping a close eye on whether Jay Y. Lee, the only son of Chairman Lee, will be promoted again, possibly to the a vice chairman’s post.

In recent months, the son has been increasing his profile at the company. He had a well-publicized meeting with Apple CEO Tim Cook last month when he flew to the U.S. to attend a memorial service for Apple founder Steve Jobs.

Jay Y. told reporters at the airport that they “discussed how Samsung can supply better parts [to Apple] in 2013 and 2014,” and that “we will continue to compete fiercely in the market - as we have in the past and are at present.”

That was a more robust role than when Jay Y. used to stand beside his father and let him do all the talking for the press. And such chances have triggered speculation that Samsung might speed up its power transfer to the third generation, especially Jay Y., the heir apparent.

There are further rumors that Kwon Oh-hyun, the president of Samsung’s recently merged chip and display division, will also be promoted to a vice chairman’s position.

Additionally, some say Lee Seo-hyun might be promoted to the president’s position at Cheil Industries, which would put her in the same level as Boo-jin, her older sister.

Another question is if Samsung’s C-Suite will continue to get younger.

Recently, Chairman Lee has been emphasizing the need to be agile to cope with the fast changes in the industry.

There is speculation that a handful of 60-something Samsung executives will step down, and 50-somethings will be promoted.

Also drawing interest is whether there will be a first female president at Samsung aside from the women from Chairman Lee’s family.